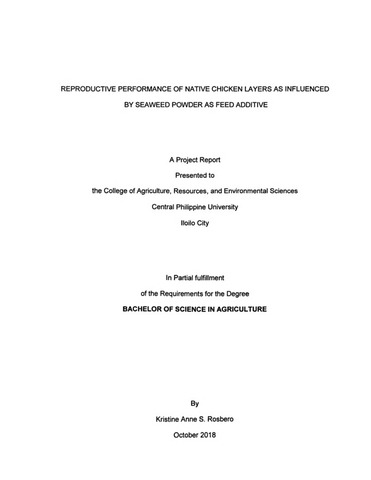 The aquatic environment is a source of many valuable food and feed ingredients such as seaweeds. In recent years consumers demand have increased the research on the production of useful food particularly through the inclusion of bioactive ingredients in the animal feeds. The aim of this study was to determine the reproductive performance of native chicken layers as influenced by seaweed powder as feed additives. The treatments used were 0.15%, 0.25%, 0.30%, and 0.40% of powdered seaweeds mixed with CPU supplemental feed. Basal diet mixed with synthetic vitamin and mineral feed premixes, commercial layer feeds and CPU supplemental feeds served as the control treatments. These were laid out in a randomized complete block design with three replications. A total of 144 native chicken layers were used and randomly distributed among the treatments. The sun-dried seaweeds were oven-dried until the stems became brittle and were powdered using a coffee grinder. These were homogeneously mixed with basal diet based on their corresponding inclusion levels then fed to the chickens. Results showed that the different levels of seaweed did not significantly (P>0.05) affect the feed consumption (2,843 to 3,613g), feed conversion ratio (74.47 to 87.84), fertility rate (45.50 to 74.69%) and hatchability rate (0.00 to 70.79%). In conclusion, the seaweed powder as additives at a proportion of 0.15% to 0.40% has comparable effect on the reproductive performance of laying hens.