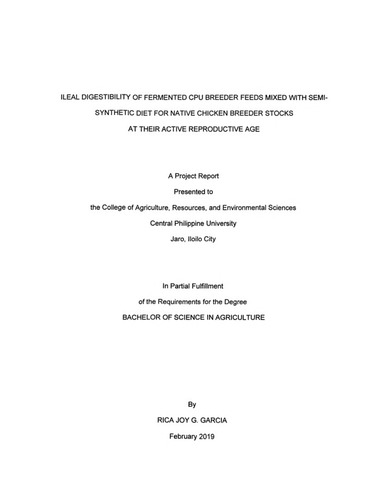 In poultry production, good quality feeds especially in nutrients needed by chickens are not sufficient. This study was done at CPU- CARES Research Building from December 24, 2017 to March 2, 2018 to determine the ileal digestibility of fermented CPU breeder feeds for native chicken breeder stocks. The formulated feeds was composed of 50% semi- synthetic ingredients and 50% breeder feeds. This was used to feed the forty 7- to 8- month old native chickens. They were acclimated for one week prior to the assay and fed with the experimental diets for four consecutive days in ad libitum basis. On the 5th day they were deprived of feed for 24 hours. On the following day they were given free access to their respective diet for one hour. After one hour of feeding, the chickens were weighed in order to know their final weight. Euthanasia were then performed and abdominal cavity was opened. Thereafter, the digesta in the lumen was flushed by distilled water. The collected samples were oven dried for 24 hours and sent to UP laboratory for amino acid analysis. The results revealed that among the essential amino acids tryptophan (0.001668%) had the highest value followed by histidine (0.001668), leucine (0.000259%), lysine (0.000213%), valine (0.000104%), phenylalanine (0.000085%), and methionine (0.000036%). Threonine (0.00001%) was the lowest. Among the non- essential amino acids, glycine had the highest and alanine had the lowest value at 0.000293% and 0.000007%, respectively. On the other hand, tryptophan had a standardized ileal digestibility of 44.97% which is the highest among all the essential amino acids followed by leucine and phenylalanine with 21.68% and 1%, respectively. Furthermore, glutamic acid (90.12%) was the highest among the non- essential amino acids and cysteine (1%) as the lowest.