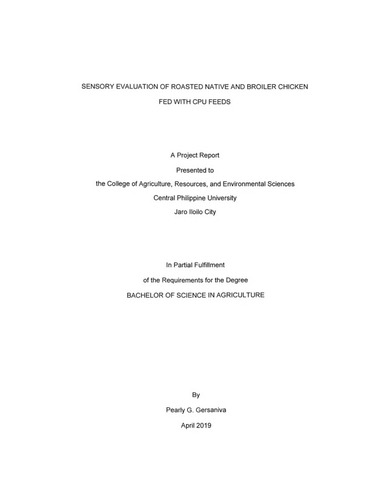 The study was conducted from October 9 to 10, 2018 at the laboratory room of the College of Agriculture, Resources and Environmental Sciences, Central Philippine University, Jaro, Iloilo City, to explore the suitability of the meat in terms of taste preference, color, juiciness, tenderness, general acceptability and shrinkage percentage of roasted chicken between native and broiler chicken fed with CPU-Feeds and native and broiler chicken from local market. The meat used was composed of breasts of native and broiler chicken. These were arranged in a completely randomized design (CRD) with three replications. Results showed that there were no significant differences (P>0.05) in the percent shrinkage of roasted chicken which ranged from 45.76 to 48.18%. It was the roasted broiler chicken from CPU and local market which were more preferred by most of the panelists. For the color preference, CPU-native chicken was more preferred. Generally, there is a tendency for both the CPU-broiler chicken and commercial broiler to have better scores on taste, juiciness, tenderness and general acceptability scores compared to the other two treatments. Thus, meat of broiler chicken is ideal for roasting compared to native chicken because of its tenderness, juiciness and high acceptability. In addition, broiler chicken can reach its marketable size in six weeks while native chicken takes 3 to 4 months to attain their marketable size.