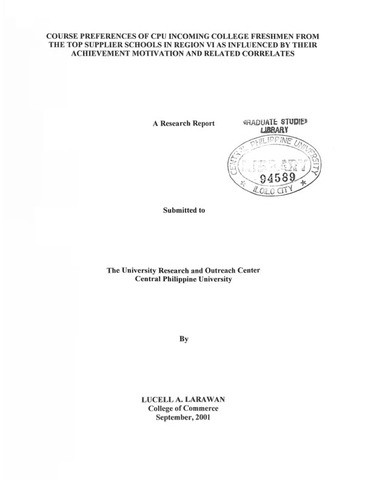 This descriptive-correlational study sought to describe the course preferences of prospective CPU college freshmen from the twelve (12) largest supplier schools in Region VI. It further aimed to determine whether the course preferences of the students are significantly influenced by their achievement motivation, sex, family monthly income, previous year’s average grade and parents’ occupation. The 2,451 senior students who were the participants of the study were purposively chosen on the basis of the list of schools that have consistently provided the largest number of CPU college freshmen for a number of years. The top twelve schools in the region were: Antique National High School, Badiangan National High School, Barotac Viejo National High School, Bingawan National High School, Buenavista National High School, Cabatuan National Comprehensive High School, Central Philippine University Development High School, Dumangas Polytechnique College, Iloilo National High School, Pavia National High School, Santa Barbara National Comprehensive High School and Saint Anthony’s College. The students were asked to answer a self-administered questionnaire and an AMQ (Achievement Motivation Questionnaire) from Small Enterprise Development Foundation (SERDEF). The data were analyzed using means and frequency distribution for the descriptive part. For the relationships of the course preference to the variables involved, Cramer’s V, Chi-square, Eta, and F-test were employed. The incoming CPU college freshmen were mostly intelligent female students who were poor. These students gave highest preference to educational, technological, and computer-related courses in college which they would like to take in a private school. In choosing their course, the students were passive about social, economic and personal considerations and did not give any importance to university’s characteristics as bases of choosing it among others. The students were given a career orientation by their respective schools of origin and by other schools. They were mostly aware of the existence of CPU. With a high level of achievement motivation, the students possessed a high probability of success in their respective career plans. The course preferences of the senior students were significantly associated with their sex, monthly family income, average grade and parents’ occupation. Furthermore, the career choices were also significantly associated with achievement motivation indicators which were: hard work, future-orientation, aspiration level, task-orientation, preference for experts as work partners, upward mobility, persistence and making every moment count.