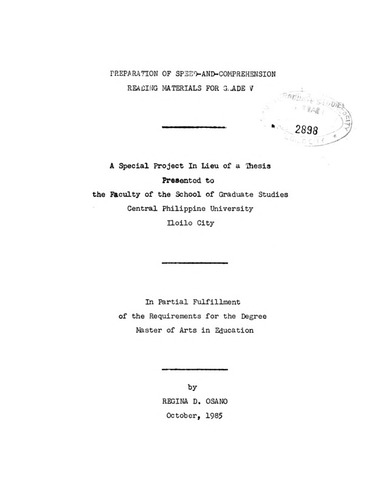 The purpose of this special project was to prepare speed-and-comprehension reading materials based on pupils’ reading interests. The project is for the second of a series of nine periods in grade five; four reading materials for appreciation of reading as entertainment, four to help pupils understand their text in Science, and four to be used as a tool in learning their lessons in Social Studies. Two sets of lessons were prepared, each set of lesson was composed of three selections which is good for one hour to give the slow readers a chance to finish at least one selection and also to challenge the bright pupils. For each of the selection in the two lessons, similar forms were prepared with the aim of making these selections parallel. The twelve reading selections were each accompanied by 15-item test exercises to test the skills on getting word meanings, choosing the best title, getting the main idea, getting the facts, outlining or sequencing and drawing a conclusion. A cloze test was also prepared for each reading selection. This investigation sought the answers to the following questions: 1. Do the reading materials reflect the interests of grade five pupils? 2. Are the reading selections appropriate for the grade? 5. How valid and reliable are the test exercises that go with the selections prepared by the researcher? This study involved 200 grade five pupils in one Central school and four barrio elementary schools in the District of Dingle, Division of Iloilo. One hundred twenty pupils took the speed-and-comprehension tests and eighty pupils took the cloze tests. The data were taken from the reading selections based on pupils reading preferences, together with speed-and-com- prehension reading exercises and cloze test which were prepared by the researcher and administered to the grade five pupils. To evaluate the test items, the index of difficulty and discriminative power and effectiveness of distractors were determined through item analysis. To determine the reliability of the reading exercises, the Kuder-Richardson formula 20 was used. The Pearson product-moment coefficient of correlation was used to determine the correlation between selections that were the same in forms. The reading materials may, be considered as reflecting the reading interests of the grade five pupils since the results of the reading inventory were used by the researcher as basis for the preparation of the materials. Eight of the twelve reading selections can be considered appropriate for the grade for which they were intended as revealed by their length, vocabulary and concept load, number of pollysyllabic words and the results of the speed-and-comprehension tests and the cloze tests. Nine of the speed-and-comprehension exercises that go with the reading selections are reliable as indicated by their indices of internal consistency. Eighty-six per cent of the test items were valid as indicated by their indices of discriminative power and functional distractors. Of the total of 180 items, only 25 items having poor discriminatory power were revised.

Master of Arts in Education with specialization in Reading (English)