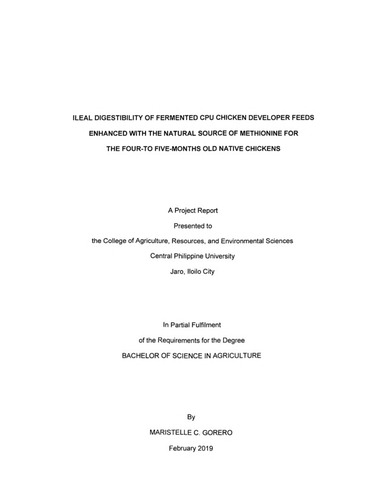 Looking for a natural source as an alternative to synthetic feeds for better growth performance and nutritional aspect becomes a concern in raising native chicken. It is in this context that this study was conducted to evaluate the ileal digestibility of fermented CPU chicken developer feeds enhanced with the natural source of methionine for the four-to five-month old native chicken. Developer feed with inclusion of 50% semisynthetic ingredient was fermented of 1:1.25 (w/v) ratio for feed and water then given to the birds on ad libitum at 146th to 149th day. Forty chickens were slaughtered through manual bleeding then the small intestines from vitelline or Meckel’s diverticulum to iloececal junction was removed. The digesta was cleansed, filtered, and oven-dried at 60°C until dried and sent to the laboratory for amino acid profile analysis. Results of the amino acid profile revealed that out of the ten amino acids present in the feeds, only histidine (0.18%) and tryptophan (0.11%) exceeded the recommended value given by the National Research Council. Apparent ileal amino acid digestibility assay gave negative values for phenylalanine, lysine, histidine, valine, methionine, threonine, tryptophan, arginine, aspartic and glutamic acid. Moreover, standardized amino acid digestibility values for phenylalanine, lysine, histidine, methionine, valine, threonine, threonine, tryptophan, arginine, aspartic and glutamic acid exceeded one hundred percent. It can be concluded that even though the AIAD values showed negative results, the digestibility of feeds improved as shown by the values using the SID assay.