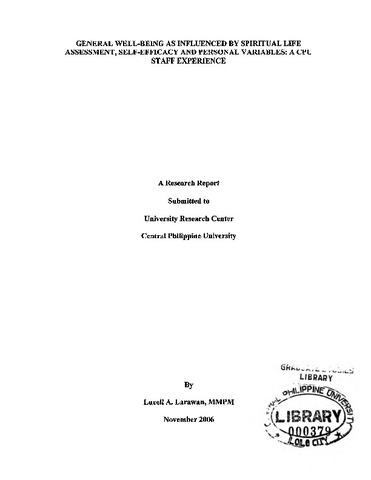 This study aimed to describe the general well-being of the CPU staff. Furthermore, it sought to test the correlation between self-efficacy, spiritual life assessment and general well-being. Based on time horizon, the study used a one-shot survey among the CPU staff members. As to method of analysis, it employed a descriptive-correlational design. This research included 204 non-teaching staff of the university who participated who participated in a total enumeration method. This research mainly used a modified General Well-being Schedule (GWB), developed for the National Center for Health Statistics (Robinson, Shaver and Wrightsman, 1991). Another instrument used was the General Self-efficacy Scale (GSE) developed by Matthias Jerusalem and Ralf Schwarzer. The researcher also used a self-administered instrument on spiritual life assessment that measures a person’s regard about giving concern to basic spiritual nurture. Frequency distribution and mean were used for the descriptive analyses while Pearson’s r, Gamma, Cramer’s V and crosstabulation were used for the inferential analyses. Data were analyzed using SPSS version 12. The staff members of CPU generally had “good spirits” which described their well-being. The self- efficacy level of the staff was “moderate”. They “have commitment” on the spiritual life indicators. Spiritual life assessment only had a slight influence towards self-efficacy. Self-efficacy and spiritual life assessment were substantially correlated with well-being. Among the personal variables of the staff, marital status and nature of work assignment were significantly correlated while age had a slight correlation with well-being. Sex and family income were not associated with well-being. Based on the findings, the CPU staff members generally have a good well¬ being that describes their quality of life and life satisfaction levels. They were moderately optimistic about their capabilities to cope with difficulties and adjust to life changes. They have some concern about maintaining a healthy spiritual life as indicated by their concern for conscience towards God, weekly church worship, daily reflections and other indicators. The staffs increase in self-efficacy and concern about spiritual life can mean a corresponding increase in their general well-being.