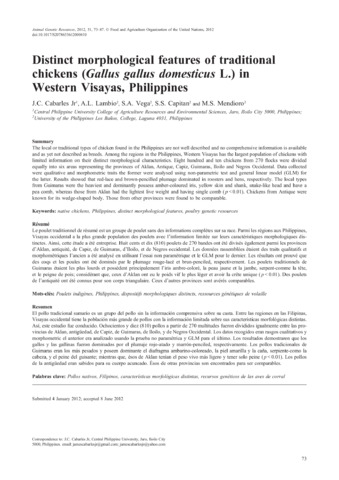 The local or traditional types of chicken found in the Philippines are not well described and no comprehensive information is available and as yet not described as breeds. Among the regions in the Philippines, Western Visayas has the largest population of chickens with limited information on their distinct morphological characteristics. Eight hundred and ten chickens from 270 flocks were divided equally into six areas representing the provinces of Aklan, Antique, Capiz, Guimaras, Iloilo and Negros Occidental. Data collected were qualitative and morphometric traits the former were analysed using non-parametric test and general linear model (GLM) for the latter. Results showed that red-lace and brown-pencilled plumage dominated in roosters and hens, respectively. The local types from Guimaras were the heaviest and dominantly possess amber-coloured iris, yellow skin and shank, snake-like head and have a pea comb, whereas those from Aklan had the lightest live weight and having single comb (p < 0.01). Chickens from Antique were known for its wedge-shaped body. Those from other provinces were found to be comparable.