CPU staff, SY 2005-2006: their level of satisfaction on the different university services, their rights, privileges and functions 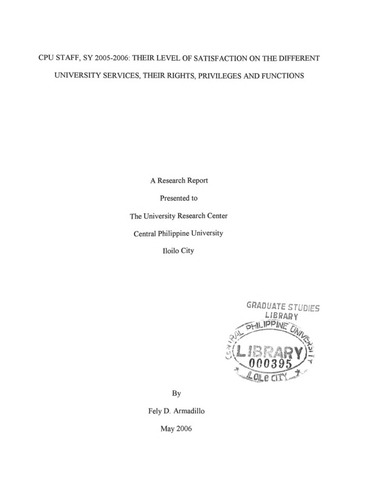 This study was conducted to find out whether or not the staff members of Central Philippine University have improved their level of satisfaction for school year 2005-2006. The researcher would like to find out furthermore if the different operating units have performed excellent service to its internal customers. Two hundred staff members were used as respondents. The correlational descriptive research design and one-shot survey were used in this study. A researcher-made questionnaire on employees’ level of satisfaction used during school year 2004- 2005 was modified and used in this survey. The findings revealed that the staff members were satisfied with the different university services, their rights, privileges, and functions. They were also satisfied with the services rendered by the different units of the university. When the respondents were grouped according to age, findings revealed that the older employees have a significantly higher satisfaction level compared to the young ones in terms of physical working condition, communication, roles and function and service excellence. When grouped according to sex, the male workers demonstrated more satisfaction than the female workers. When grouped according to educational attainment findings revealed that those who belong to a lower level of education demonstrated a higher satisfaction level. Civil status, religion, length of service and monthly income were not significantly related to their satisfaction level. There is a significant difference in the satisfaction level of the staff members for academic year 2004-2005 and academic year 2005-2006 in terms of physical working condition and remuneration and benefits