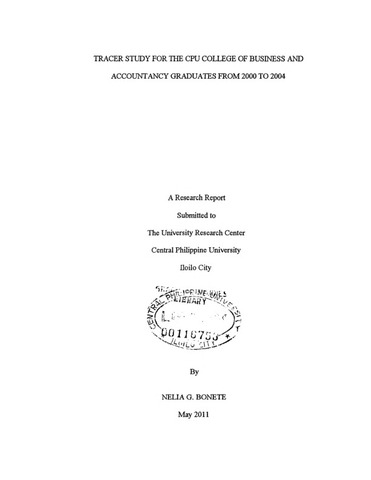 This tracer study was conducted to gather relevant information as to the employment of CPU College of Business and Accountancy graduates from school year 2000-2001 to 2003-2004. Data were collected through a self-administered questionnaire from 182 respondents or 56.7% of the 321 sample out of the 1,964 graduates of the College of Business and Accountancy from SY 2000-2001 to SY 2003-2004. The findings revealed that the respondents were mostly 25 to 26 years of age, generally female, single, and almost all came from Region 6; mostly from Iloilo province with the majority residing in municipalities. Majority were graduates of Bachelor of Science in Commerce. Twenty six of them received honors/awards including one who graduated summa cum laude and 12 cum laude. Almost all were paying students and only a few were scholars. The respondents’ main reason for taking up their respective courses was the prospect for immediate employment and their major reasons for taking their degree at Central Philippine University were the known standard of instruction; the quality of graduates; and graduates’ performance in the field. Out of 50 who passed exams, 14 passed the CPA Board Exam and 26 passed Career Service Professional and Sub-Professional examinations. Three-fourths of those who had training, had at least one short-term profession or work-related training pursued mainly for professional development. Eight out often graduates were employed at the time of the study and seven out often were permanent employees. Almost all of them were employed locally and only very few work outside the country. Almost forty percent of the respondents were in the rank or clerical level in their present jobs, the rest were either practicing their profession, in technical or supervisory level; and a few in managerial level and self-employment. The respondents had varied occupations but one-fifth of them were employed in banks or financial intermediaries. Eight out often agreed that their respective degree were relevant to their first job and found communication, human relations, problem-solving skills most useful in their first job. Almost half of them changed jobs. Salaries and benefits were their major reasons for staying and also for changing their jobs. Generally, the respondents landed their first job in less than a year with the highest percentage in less than a month. Most of the respondents found their job by recommendation of someone and they mostly received a monthly gross income of P5,000 to less than P10,000 in their first job. Generally, the respondents did not make suggestions on how to improve the curriculum, but they rated practicum and classroom instruction as highly significant in their professional life. The top three areas rated high in satisfaction based on the respondents’ experience during their college were the Library, Instruction and Faculty. The test of association using Chi-square revealed that the respondents’ sex and the location of their residence had no bearing on the length of search or waiting time to get employed after graduation.