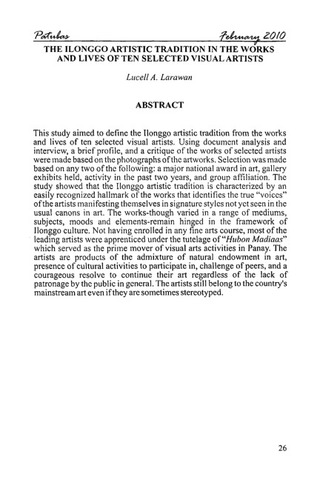 This study aimed to define the Ilonggo artistic tradition from the works and lives of ten selected visual artists. Using document analysis and interview, a brief profile, and a critique of the works of selected artists were made based on the photographs of the artworks. Selection was made based on any two of the following: a major national award in art, gallery exhibits held, activity in the past two years, and group affiliation. The study showed that the Ilonggo artistic tradition is characterized by an easily recognized hallmark of the works that identifies the true “voices” of the artists manifesting themselves in signature styles not yet seen in the usual canons in art. The works-though varied in a range of mediums, subjects, moods and elements-remain hinged in the framework of Ilonggo culture. Not having enrolled in any fine arts course, most of the leading artists were apprenticed under the tutelage of “Hubon Madiaas” which served as the prime mover of visual arts activities in Panay. The artists are products of the admixture of natural endowment in art, presence of cultural activities to participate in, challenge of peers, and a courageous resolve to continue their art regardless of the lack of patronage by the public in general. The artists still belong to the country's mainstream art even if they are sometimes stereotyped.