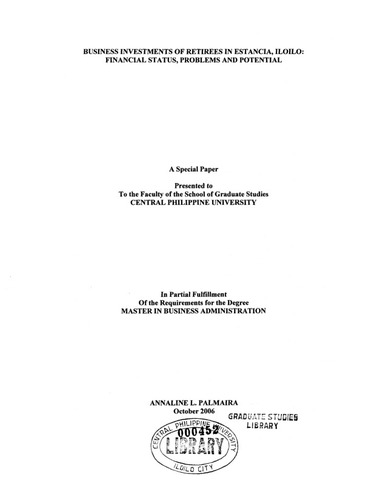 This descriptive research aimed at determining the Financial Status, Problems, and Potentials of Business Investments of retirees in Estancia, Iloilo. This was conducted for three months, from January to March 2007. There were thirty respondent retirees both from government and private institutions, made use a portion of their lump-sum retirement benefits as initial capital on their respective business investments. The major variables of the study were the respondent’s age, civil status, sex, and educational background. The other key variables were capitalization, organizational structure, product/ service offered, financial status, problems, and potential of the retiree’s business investments. The researchers used a prepared survey questionnaire as an instrument. From the results of the survey, three cases were selected on the basis of the respondent’s business investment success in terms of profit, the respondent’s business investment which generates the most employment, and the respondent’s failure on its business investment. Additional data were collected through in-depth interviews with the three retirees in preparing the cases. Statistical analysis was done with the aid of SPSS 11.0 software using frequency count and percentages as tools in the descriptive statistics and cross-tabulations. For the three cases, a SWOT analysis was prepared using a SWOT matrix.