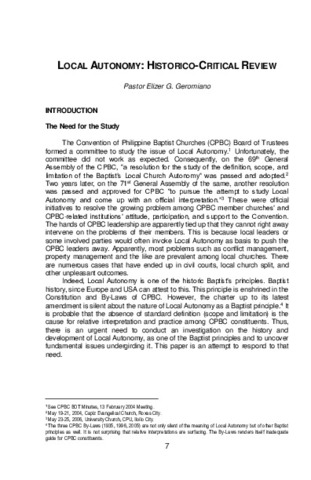 The Need for the Study The Convention of Philippine Baptist Churches (CPBC) Board of Trustees formed a committee to study the issue of Local Autonomy. Unfortunately, the committee did not work as expected. Consequently, on the 69th General Assembly of the CPBC, “a resolution for the study of the definition, scope, and limitation of the Baptist’s Local Church Autonomy” was passed and adopted. Two years later, on the 71st General Assembly of the same, another resolution was passed and approved for CPBC “to pursue the attempt to study Local Autonomy and come up with an official interpretation.” These were official initiatives to resolve the growing problem among CPBC member churches’ and CPBC-related institutions’ attitude, participation, and support to the Convention. The hands of CPBC leadership are apparently tied up that they cannot right away intervene on the problems of their members. This is because local leaders or some involved parties would often invoke Local Autonomy as basis to push the CPBC leaders away. Apparently, most problems such as conflict management, property management and the like are prevalent among local churches. There are numerous cases that have ended up in civil courts, local church split, and other unpleasant outcomes. Indeed, Local Autonomy is one of the historic Baptist’s principles. Baptist history, since Europe and USA can attest to this. This principle is enshrined in the Constitution and By-Laws of CPBC. However, the charter up to its latest amendment is silent about the nature of Local Autonomy as a Baptist principle. It is probable that the absence of standard definition (scope and limitation) is the cause for relative interpretation and practice among CPBC constituents. Thus, there is an urgent need to conduct an investigation on the history and development of Local Autonomy, as one of the Baptist principles and to uncover fundamental issues undergirding it. This paper is an attempt to respond to that need. The Objectives This study is an attempt to respond to the resolution passed and approved during the 69th CPBC General Assembly calling for the study of the definition, scope, and limitation of the Baptists local church autonomy. The urgency of such need was augmented when after two years another resolution was passed and approved on the 71st CPBC General Assembly. The other resolution, however, was more specific – to study Local Autonomy and come up with an official interpretation. Also, it is on this mandate that this study responds. To do so, this paper attempts to review the history of Local Autonomy since the Sixteenth Century Reformation to the present, highlighting its development from Europe (Old World), North America (New World) and the Philippines (CPBC). Facts and data would not be novel to informed readers, only new interpretations will be. Since the problem of Local Autonomy is fundamentally linked with ecclesiology, this paper also attempts to reconstruct the Baptist understanding of the church in the light of the New Testament. The outcome of this paper will be offered humbly to CPBC as a suggested reference for institutional and organizational action on the issue at hand.