Men who have sex with men (MSM) in Iloilo City, Philippines: Profile, sexual history, level of knowledge about HIV/AIDS and sexual risk-taking behaviors 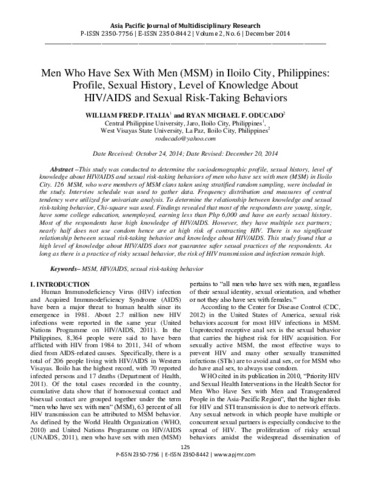 This study was conducted to determine the sociodemographic profile, sexual history, level of knowledge about HIV/AIDS and sexual risk-taking behaviors of men who have sex with men (MSM) in Iloilo City. 126 MSM, who were members of MSM clans taken using stratified random sampling, were included in the study. Interview schedule was used to gather data. Frequency distribution and measures of central tendency were utilized for univariate analysis. To determine the relationship between knowledge and sexual risk-taking behavior, Chi-square was used. Findings revealed that most of the respondents are young, single, have some college education, unemployed, earning less than Php 6,000 and have an early sexual history. Most of the respondents have high knowledge of HIV/AIDS. However, they have multiple sex partners; nearly half does not use condom hence are at high risk of contracting HIV. There is no significant relationship between sexual risk-taking behavior and knowledge about HIV/AIDS. This study found that a high level of knowledge about HIV/AIDS does not guarantee safer sexual practices of the respondents. As long as there is a practice of risky sexual behavior, the risk of HIV transmission and infection remain high.