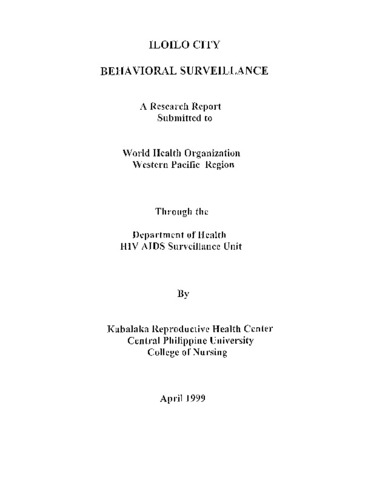 This second behavioral surveillance was conducted to establish a trend on the characteristics, knowledge, attitude, and practices of high-risk individuals--the female sex workers (FSWs) . The men having sex with men (MSMs) were included in order to generate data that could assist health workers as to whether they could be classified among the high-risk individuals. Specifically, this surveillance aimed to: 1. Determine the knowledge, attitude, and exposure of female sex workers and men having sex with men to STD/HIV/AIDS intervention. 2. Identify the risk reducing practices, risk accordance behavior for HIV/AIDS, and health seeking practices of female sex workers and men having sex with men. 3. To determine the comparative analysis of the first and second Behavioral Surveillance. The surveillance utilized an interview schedule devised by the DOH-FETP. Using a non-probability sampling technique, the study involved 360 subjects--each group [the female registered sex workers (RFSWs), the female free-lance sex workers (FFSWs), and men having sex with men (MSMs)] was represented by 120 subjects. The RFSWs were randomly taken from the night clubs, massage parlors, and KTV karaoke bars, while the FFSWs were found in Casa, Tiong's, bar houses, Villa and Molo districts, shopping malls, and in the different streets in Iloilo City. The MSMs included 80 gays and 40 call boys who had male customers. Frequency counts and percentages were used in the analysis of the data. Results of the second behavioral surveillance revealed that: (1) majority of the subjects were in the 20-24 age bracket, single, and had high school education; (2) they had at least one to two sex partners and did not use condom on their last sexual intercourse; (3) the MSMs with female sex partners generally do not use condom; (4) two subjects were found to have indulged in injecting intravenous drugs, never shared syringes with anyone, and did not re-use the syringes and needles; (5) pain and burning sensations with genital discharges were generally felt majority of the subjects affected with STDs--the MSMs who claimed to have experienced the signs and symptoms of STDs noted some lesions in their ano-genital areas; (6) The Social Hygiene Clinic of the WVMC was the most popular place for STD check-up and treatment; (7) majority of the subjects considered themselves as being vulnerable to STD/HIV/AIDS; (8) less than two-thirds of the subjects knew three health practices that can protect them from contacting STD/HIV/AIDS, mostly among the RPSWs and least among the MSMs; (9) the top three sources of information regarding STD/HIV/AIDS among the FSWs were television, health workers, and radio--the MSMs generally receive information from friends/relatives, television, and radio; (10) more number of sexual contacts by the FSWs with their regular sex partners were noted in the second behavioral surveillance compared with the first; (11) a slight increase, in the consistency of condom use was noted; (12) an increase in condom use was observed among the FSWs; (13) a decline in condom use was noted among the FSWs when having sex contacts with their non-regular sex partners; (14) the number of RFSWs who had signs and symptom's of STDs six months prior to the surveillance decreased; (15) an increase was noted in the number of FSWs who considered themselves vulnerable to HIV/AIDS infection; and (16) an encouraging increase in knowledge (3 correct practices that can protect one from contacting STD/HIV/AIDS) was observed in the second surveillance.