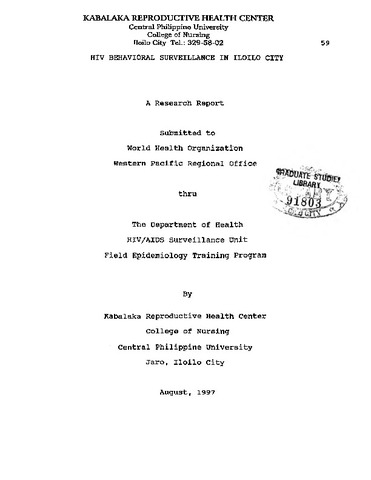 This HIV behavioral surveillance conducted in Iloilo City was designed to complement the HIV serologic surveillance conducted since 1994 by the City Health Office and Iloilo Social Hygiene Clinic. This investigation aimed to generate data on risk- behaviors among selected groups of individuals for the prevention and control of STD/HIV/AIDS. Using a purposive sampling technique, four target groups, each consisting of 100 subjects namely; female free-lance sex workers (FFLSW), men having sex with men (MSM), male free-lance sex workers (MFLSW) and clients of female sex workers (CFSW) were considered in the study. The data for this descriptive research were gathered through the use of a structured interview schedule developed by the HIV/AIDS Surveillance Unit of the DOH. Additional questions were added to supplement the items required in the analysis. Statistical tools include frequencies and means were used as descriptive statistics and the Chi-square test for independence and the Pearson's r set at .05 alpha level as inferential statistics. Statistical computations were availed via the Statistical Package for the Social Science (SPSS) Studentware. The study found that: (1) The 400 subjects composed of 300 (75%) males and 100 (25%) females. Majority were in the 15-19 years old age bracket, high school educated. (2) In terms of risk behaviors, majority had one to two sex partners, never use condom, and did not use condom in their last sexual intercourse. (3) As to use of intravenous drugs, 23 confirmed the use of injectable drugs and 13 shared the needles/syringes to their partners and clients. Cleaning methods employed were use of alcohol and boiling. (4) Pain/burning sensation was felt by majority of the subjects, followed by yellowish discharge from the genitalia, and some reported sores/ulcers in their penis and vaginal area. (5) The Iloilo Social Hygiene Clinic was the most popular place for STD check-up and treatment. (6) Majority of the subjects had permanent lovers, mostly single, and students. (7) French kissing, sodomy/vaginal sex, and fellatio/cunnilingus were commonly practiced among the subjects. (8) The frequency of condom use were significantly independent among the subjects grouped according to educational attainment— in favor of those who had reached high school. (9) The incidence of signs and symptoms of STD were significantly independent among the subjects classified according to number of partners— in favor of those with 1-2 partners, those who did not use condom during their last sexual intercourse, and those who use intravenous drugs. (10) Pain/burning sensation as a sign and symptom of STD was positively and significantly correlated with number of sex partners and other signs and symptoms such as yellowish discharges and sores/ulcers. Yellowish discharges as another sign and symptom of STD was positively and significantly correlated with number of sex partners and the presence of sores/ulcers. Finally, sores/ulcers as a sign and symptom of STD was positively and significantly correlated with the use of condom on the last sexual intercourse.