A contrastive analysis of English and Magindanao verbs 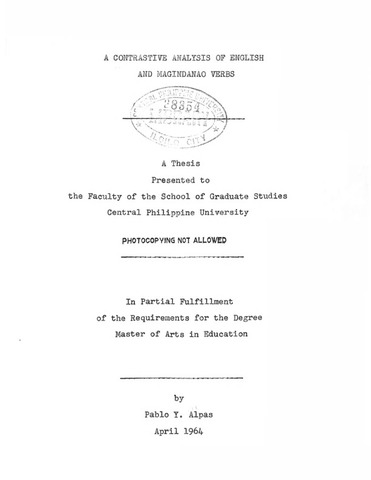 After the Second World War, there appeared two camps of opinion concerning the teaching of English in the Philippines. The first camp is composed of those who cling to the use of English grammars based on Latin models and the second is composed of the linguists who believe that the traditionalists' method is obsolete and want to introduce a new perspective called "The Teaching of English as a Second Language." In the division of Cotabato, however, the question as to which camp should prevail was settled when the English supervisor held seminars on the ’’Teaching of English as a Second Language” in November of 1961 and advised the field to shift little by little to the linguistic methods in the teaching of English. There remains the problem of the absence of materials by which to guide teachers of English on how to use the linguistic approach. Some of these materials should be those that should tell the teachers what to teach first, what to emphasize, and what not to teach among other things. This problem is what the author has in mind. Statement of the problem. It is the purpose of this study (1) to compare English and Magindanao verbs, (2) to analyze their points of differences, and (3) to draw implications for the teaching of English to Magindanao students. Importance of the study. This study, when successful, should benefit about one hundred thousand Magindanao school children in the public schools and about five thousand in the private schools of Cotabato. It can indirectly benefit the more than eight hundred thousand Magindanaos living among the 1,156,921 people of Cotabato province.