A study of pupils' difficulty in pronouncing critical sounds in English 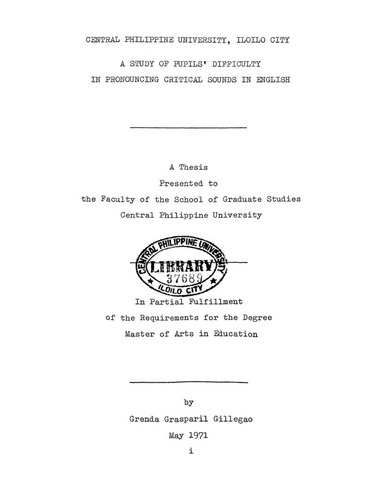 This study was made to survey pupils’ difficulties in pronouncing critical sounds in English, to evaluate the seriousness of these difficulties, to determine the probable causes of mispronunciation, and to draw implications for more effective teaching of critical sounds in English to elementary school children. Four hundred nine pupils from Grade I to Grade VI in five central schools composed the subjects of the study. In Grade I and Grade II, pictures and real objects were used for the testing; in the higher grades, a written instrument was used. A record was kept of each pupil’s responses. Test results were analyzed by schools, then by grade level. The extent of the errors committed was expressed in terms of an average frequency count of incorrect responses, the percentage of pupils committing the errors in every grade, and in every school. Findings. Twenty-two segments were considered 1 2 difficult for the pupils from Grade I to Grade VI, in the schools under study. Segments are difficult when missed by more than 10 per cent of the cases. Of the difficult segments ten are vowels; nine, consonants; one, a semivowel; one, a diphthong; and one, a variant of /ǝ/. In terms of the number of pupils committing the errors, the same sort of difficulties were found. The only difference between the two counts was in the ranking of the difficult segments. It was observed that errors which seemed to be common seemed to be also persistent; however, there was improvement in the results of the teaching from Grade I to Grade VI. The probable causes of errors among children are the interference of the native sounds in the learning of the new sounds, overcorrection, spelling pronunciation, and inadequate training of most teachers in the teaching of English as a second language. Conclusions. From the above-mentioned findings it can be concluded that (1) of the thirty-nine segments of significant English sounds, seventeen or 44 per cent were pronounced proficiently by the pupils, and twenty-two or 56 per cent were missed; (2) errors in the pronunciation were caused by the interference of native sounds and native spelling in the learning of English sounds, overcorrection, and inadequate 3 training of most teachers in the teaching of English as a second language; (3) the tendency of the common error to be also a persistent error shows that once a gross error is made and allowed to be established up to the third grade, it is difficult to eradicate. Recommendations. On the basis of the findings and conclusions arrived at in the study, it is recommended that: (1) language teachers must take an accurate diagnosis of their pupils' proficiency in the production of English sounds at the beginning of the school year; (2) administrators must pay attention to the proper placement of teachers; (3) there should be more extensive research on the production of the significant or critical sounds of English; (4) other factors which may cause these problems be also studied.