CPU students’ awareness of, attitude towards, and involvement in the spiritual programs of the university and their perceived impact on their lives 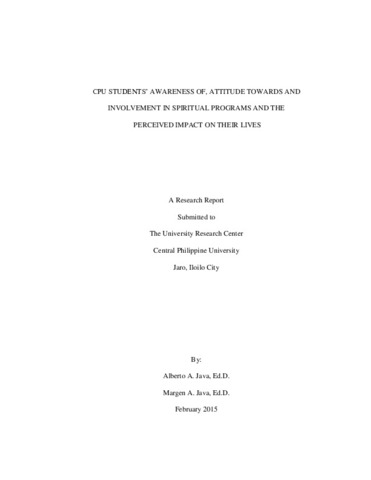 Java, Alberto A.
Java, Margen A.

This study was conducted to determine the students’ awareness of, attitude towards, and involvement in the spiritual programs of the university and their perceived impact on their lives. The one-shot survey was used in the collection of data among the 292 graduating college students in 2010. Data collected were processed and analyzed using Statistical Package for Social Sciences (SPSS). For the descriptive part, the major variables were described using frequency distribution and percentages. The z-test was used to determine significant differences between variables and Chi-square and Cramer’s V were used to determine the relationship between specified variables. Results of the study showed that the respondents are generally female, aged 20 years old and younger, belong to the Colleges of Nursing and Business and Accountancy, graduates of public high schools located either in the cities or towns and living with their parents or staying in boarding houses while studying at CPU. The University Church, respective College of the respondents, Department of Religion and Ethics, College of Theology, and, Chaplain’s Office were the offices that offer spiritual programs as perceived by students. Bible study, Christ Emphasis Week Convocations and Devotionals are the major spiritual programs done by the University. Emergency Response Team, CPU Pastor’s Kids, Campus Crusade for Christ, Student Nurses Association of the Philippines, and, Campus Bible Fellowship are the campus organizations which help the students in their spiritual life. The respondents’ awareness of spiritual programs is determined by their sex, age, and college to which they belong. The students have favorable attitude towards the spiritual programs of the university in all areas, namely, role of faculty and staff, role of religious activity, necessity of the program and role of CPU as a whole. Irrespective of their sex, age, college, type and location of high school where they graduated and living arrangement while studying at Central Philippine University, students are more likely to have a favorable attitude towards spiritual programs offered by the university. The location of high school where respondents graduated and college to which the respondents belong determined their involvement in campus organizations while their sex, age, and college determined their involvement in spiritual activities. Majority of the respondents believed that their spiritual life had been changed because of exposure to the different spiritual programs and activities in the university. Only location of high school where respondents graduated is significantly associated with the perceived impact of spiritual programs on their lives. The attitude of the respondents is a determinant of the perceived impact of these spiritual programs on their lives.

Java, A. A. and Java, M. A. (2015). CPU students’ awareness of, attitude towards, and involvement in the spiritual programs of the university and their perceived impact on their lives (Research report). Jaro, Iloilo City: University Research Center, Central Philippine University.