A study of common transfers of Hiligaynon constructions into English 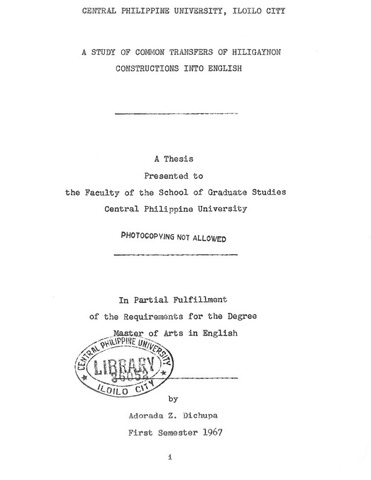 This study is, in a way, to ascertain the soundness of a principle in second-language teaching, which states that a first language has an enormous influence on the learning of a second. The researcher undertook this study (1) to discover the types of errors in writing in English committed by Hiligaynon students and the commonness and persistence of such errors, and (2) to find out in which of these Hiligaynon structures interfere in the construction of English. The corpus of this study consists of 580 compositions of college freshmen gathered from four co-educational schools in the City of Iloilo. The compositions taken from two of these were written in 1960 and those from the other two in 1965. This research sampled compositions five years apart because the researcher wanted to determine whether errors committed in 1960 still persisted in 1965. Care was taken to make the two sets representative of the freshmen of the Western Visayas. The following procedure was followed in this study: 1. The compositions were each examined for grammatical errors. Sixteen major categories of errors were recorded, some of which were broken down into sub-types. 2. For each type of usage listed, a count was made of wrong and of proper usages. The instances of error and correct usage, when added up, gave the sum of usage. 3. A count was then taken of the number of students committing each error in order to obviate the influence of length of composition on the calculations. 4. The three types of frequency counts were next reduced to percentages in three ways: (1) errors in one type of usage against the sum of that particular type of usage, (2) errors in one type of usage against the sum of all usages, and (3) number of cases committing an error against the total number of students used in the study. An over-all ranking of each of these percentage counts showed the seriousness of each error in three ways: degree, commonness, and persistence. 5. To determine the extent to which the types of errors isolated were caused by the interference of Hiligaynon structures in English, the researcher studied the errors in terms of a three-point contrastive analysis which set the incorrect sentence against a correct English version and a correct Hiligaynon version of it. Findings. The nine most difficult errors are the following: Wrong Tense, Non-observance of Parallel Structure, Misuse of Prepositions, Lack of Concord, Wrong Use of Conjunctions, Wrong Verb Form, Misuse of Articles, Shift in Point of View, and Wrong Number for Nouns. Of the sixteen errors recorded, the following are the common errors ranked in descending order: Wrong Tense, Lack of Concord, Misuse of Prepositions, Wrong Verb Form, Wrong Number for Nouns, Misuse of Articles, Shift in Point of View, Non-observance of Parallel Structure, Wordiness, Wrong Word Choice, Wrong Use of Conjunctions, Mixed and Illogical Construction, and Word-for-Word Translation. A comparison of the percentage of students who committed the same error in 1965 revealed that the same errors which were listed common were also the ones most persistent. The contrastive analysis of English and Hiligaynon revealed that out of the sixteen major errors listed, the following were largely caused by the interference of the Hiligaynon structure: Wrong Tense, Lack of Concord, Misuse of Prepositions, Wrong Number for Nouns, Misuse of Articles, Shift in Point of View, Non-observance of Parallel Structure, Wordiness and Repetitiveness, Wrong Word Choice, Wrong Use of Conjunctions, Mixed and Illogical Construction, Word-for-Word Translation of a dialect expression, Wrong Word Order, Wrong Use of Verbals, and Improper Substitutions. Conclusions. A. All of these findings confirm the general observation that, for lack of mastery of the target language, the second-language learner always falls back on his own language and transfers the structural forms and meanings of his language into the one he is learning. B. The contrastive analysis showed at least eight types of differences in the morphological and syntactic structures of English and Hiligaynon which constitute the "trouble spots" in the Hiligaynon students’ learning of English. C. Various structures that the contrastive analysis identified as critical because of evident likelihood of interference from the dialect are high in the hierarchy of difficulty. This proved that previously learned language habits have a tremendous influence on the learning of a second language. D. This research revealed that after a ten-year study of English, the students used as cases had not yet mastered the basic structures of the language. This implies that there is a need for more effective teaching of this second language, if not a reexamination of the whole program of English instruction from Grade I. Recommendations. The researcher has made seven recommendations on administrative policy, seven pointers in pedagogy, and three suggestions for future research.