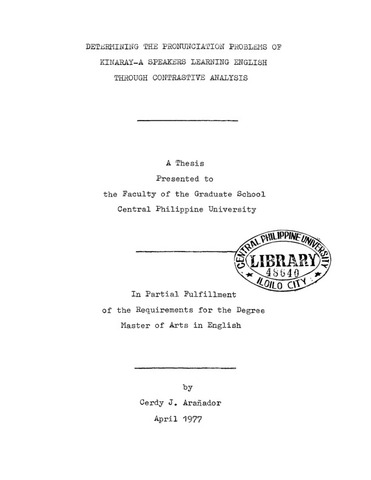 Kinaray-a is one of the three dialect variants of Panayan Bisayan, the two others being Aklanon and Hiligaynon, the latter being spoken by 10.2 percent of the Philippine population. Panayan Bisayan, like the other major Philippine languages, belongs to the great Malayo-Polynesian family of languages. A study by Griño shows this classification of Kinaray-a: Deep Kinaraya (which is of three subtypes; namely, Deep Antique Kinaraya-a, Deep Aklan Kinaray-a, and Deep Iloilo Kinaray-a (the last with two sub-subtypes, Central Deep Iloilo Kinaray-a and Coastal Deep Iloilo Kinaray-a), Dumalagnon, Lemerinhon, Central Iloilio Kina- ray- a, Pototanon, and East Coast of Iloilo Kinaray-a. The Kinaraya-a in this study belongs to the Central Iloilo type. a. Statement of the problem. The study hopes to answer the following questions and point out some pedagogical implications of the results of the comparisons 1. What are the differences and similarities between the Kinaray-a and the English sound systems? 2. How will knowledge of contrastive analysis help a teacher of English solve pronunciation problems of a Kinaray-a speaker learning English? 3. What are the expected pronunciation problems of Kinaray-a speaker learning English? 4. How have these differences and similarities actually hindered or helped the Kinaray-a speaker learning English? b. Scope and limitations of the study. This study involved only the Kinaray-a spoken in Central Iloilo, the informants being natives of Tina, Badiangan, Iloilo. Because the grammatical structure of Kinaray-a and Hiligay- non are very highly similar, only their sound systems will be covered by the study. Intonation, which is suprasegmental feature of the dialect, was likewise excluded. This study then included only the segmental phonemes and their phonetic features, the accentual system, and syllable structure.

Master of Arts with major in English