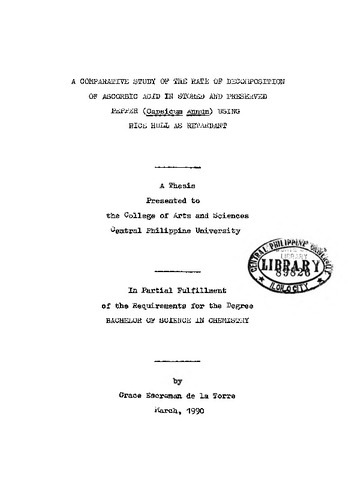 Peppers are rich in vitamins especially vitamin C and minerals like calcium, phosphorus, iron and a pungent ingredient known as capsaicin. Peppers are used as condiment and extensively in flavoring meats such as sausages and vegetable foods. Besides being food flavoring and vegetable foods, they are also powerful local irritants and heart stimulants. Pepper plants are cultivated in cold places and grown like tomatoes. The fruits are harvested when mature green, since ripening continues after the picking of the fruits. The harvested fruits are stored for household consumption or transported to the market. Peppers are shipped and transported to other parts of the country by bulk. Producers depended on bamboo baskets or “kaing” for packaging. This sometimes cause spoilage of peppers, since pressure on handling and temperature change cannot be avoided. During storage, peppers gradually rot or decay; some of its components are lost or just decrease- Such components are protein, volatile oils, capsaicin and ascorbic acid.6 The ascorbic acid content of pepper reduces when peppers are beginning to show spoilage, since ascorbic acid easily oxidizes. The spoilage of peppers is attributed to sudden temperature rise and oxygen accumulation. Oxygen activates the ascorbic acid oxidase, which is responsible for the reduction and total loss of ascorbic acid. Ascorbic acid oxidase is a copper—protein complex, and ascorbic acid deteriorates rapidly in the presence of traces of copper catalyst. Object of the Study The purpose of the study is to investigate the maximum storage life of peppers and also to determine how the storage of peppers using rice hull as retardant, affects the ascorbic acid content of pepper.