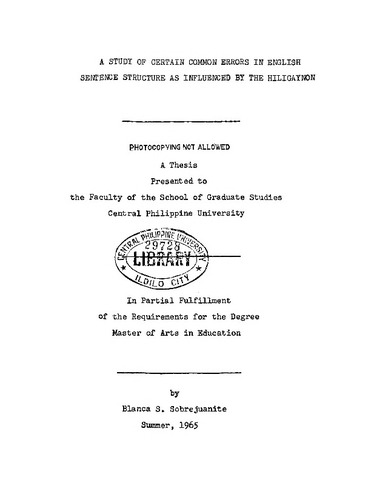 Statement of the problem. A study of all possible errors in structuring English sentences is too broad a subject for a study of this scope; hence, this study was limited to errors in noun-head modifications, which were influenced by the Hiligaynon. To arrive at satisfactory conclusions and recommendations, the researcher attempted to find answers to the following subordinate problems: 1. What are the types of errors in noun-head modification which Visayan students are apt to commit? 2. What is the magnitude of each type of error? 3. Which of these errors are due to the interference of the Hiligaynon? 4. How is the influencing to be explained? What will contrastive analysis reveal? 5. How much influence is exerted by Hiligaynon on the learning of English? 6. How will the findings of this study help the English teachers? From this study, sources of difficulty were pointed out and a hierarchy of difficulties established.