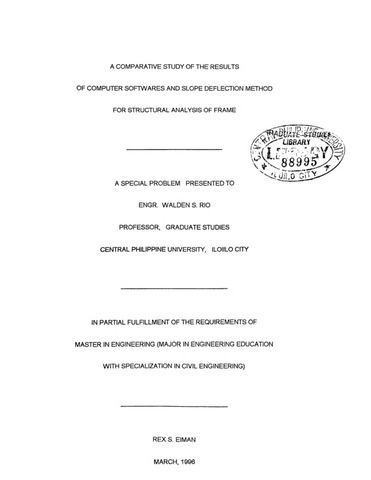 This study aims to compare the result of the computer programs and slope deflection method for the structural analysis of frame. The computer programs being referred are MICROFEAP-II (P1 Module) and RISA-2D (R) Version 3.00. The frame structure consists of six structural members wherein only the end moments derived from using the computer program and slope deflection method are taken for the statistical analysis. There are twelve end moments in each method of structural analysis and are considered as correlated samples because they are being individually matched after administering the methods. The end moments of computer programs and slope deflection method are referred as X-variables and Y-variables respectively. The statistical tools employed are the Mean, Standard Deviation, t-test for testing the hypothesis and Pearson’s Correlation Coefficient to determine the relationship of two variables. It was found out that the two computer programs generate the same results. Moreover, there is no significant difference between the resulting end moments derived from using the MICROFEAP-II (P1 Module) and RISA-2D Version 3.00 to that of Slope Deflection Method. The correlation coefficient of two variables is +1.0 which is a perfect positive relationship.

Master of Engineering Education with Specialization in Civil Engineering