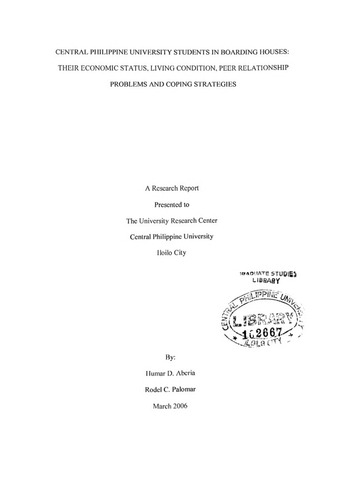 This descriptive-qualitative investigation attempted to determine the economic status, living condition, peer relationship, problems, and coping strategies of CPU students staying boarding houses. Data for this investigation were gathered from 360 randomly selected students of the University using three data-gathering instruments: the Interview Schedule, Focus Group Discussion (FGD) Guide and Interview Guide. The Interview Schedule was face and content validated and revised. The data were presented in frequency distribution tables and substantiated by FGD result and interview of key informants. Result of the investigation revealed the respondents were mostly 17 years old and above, female, not work students and come from rural areas of the province of Iloilo. The greater majority of the students’ fathers are farmers and government employees while most of their mothers are teachers and housewives. Most of the respondents have their own house built in their own lot, get their drinking water mostly from deep well and mineral water and use water sealed or flush toilets. Most of the respondents rent a bed space in the boarding house, paid for their stay on a monthly basis, use either charcoal or liquefied petroleum gas for cooking and buy purified or mineral water to drink. Most boarding houses where the respondents stay have separate flush toilets and bathrooms for male and female boarders. The number and dimension of bedrooms and boarders per room varies, however the average student per space ratio is 25.59 square feet per person. Electric fans are the most common appliance used while television is allowed to be used by many owners. Electricity is commonly used for ironing clothes and most students wash their own clothes. The respondents encountered numerous problems at home, in the boarding house and in relating to others where they employed various coping strategies to solve or face the problems. The respondents find it cheaper to stay in the boarding house than in the dormitories of the University.