Level of self-concept of the College of Theology students at Central Philippine University, school year 2005-2006 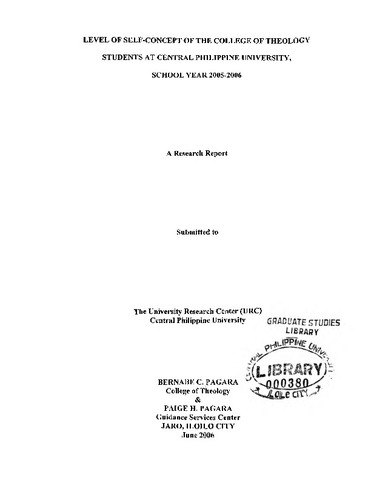 This study determined the level of self-concept of the College of Theology (COT) students at Central Philippine University (CPU), school year 2005-2006. This study is a descriptive-relational research and it used the validated questionnaire based on Mary and Robert Goulding models. Collected data were tabulated, summarized, and analyzed by simple percentages and frequency distribution. These data were encoded using Statistical Package for Social Sciences (SPSS) software. Gamma and chi-square were used to determine the relationship between the independent and dependent variables. The results revealed that majority of the respondents who enrolled in the College of Theology in SY 2005-2006 were middle child in terms of birth-order position with economic status as way below poverty line. Further, the respondents’ self-concept remained the same regardless of their conversion experience (number of years having been baptized), length of church membership, family income, family status, parents guidance and supervision, and significant others. Neither the level of their self-concept has been affected by the said independent variables except ordinal position in the family. This study concludes that the respondents had very good level of self-concept because of increased personal spirituality. One’s spirituality may directly influence (predict) self-concept, whereas, certain parental influences may only indirectly affect self-concept. Overall, the findings of this study is not complete, hence academic performance of the same respondents will be explored in the next two years in the light of their level of self-concept.