Streamlining workshops in business permits and licensing system of the cities of Puerto Princesa, Tagbilaran and Zamboanga 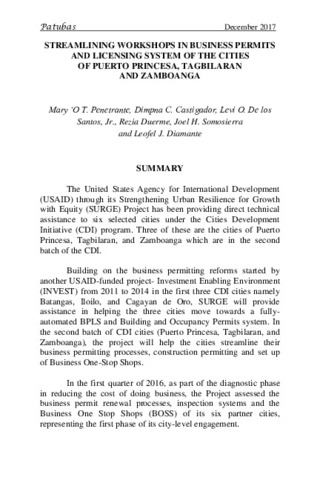 The United States Agency for International Development (USAID) through its Strengthening Urban Resilience for Growth with Equity (SURGE) Project has been providing direct technical assistance to six selected cities under the Cities Development Initiative (CDI) program. Three of these are the cities of Puerto Princesa, Tagbilaran, and Zamboanga which are in the second batch of the CDI. Building on the business permitting reforms started by another USAID-funded project- Investment Enabling Environment (INVEST) from 2011 to 2014 in the first three CDI cities namely Batangas, Iloilo, and Cagayan de Oro, SURGE will provide assistance in helping the three cities move towards a fully automated BPLS and Building and Occupancy Permits system. In the second batch of CDI cities (Puerto Princesa, Tagbilaran, and Zamboanga), the project will help the cities streamline their business permitting processes, construction permitting, and set up of Business One-Stop Shops. In the first quarter of 2016, as part of the diagnostic phase in reducing the cost of doing business, the Project assessed the business permit renewal processes, inspection systems, and the Business One Stop Shops (BOSS) of its six partner cities, representing the first phase of its city-level engagement. In the second quarter, this benchmarking activity was identified following the experiences of the previously assisted CDI cities of Batangas, Iloilo, and Cagayan de Oro that a direct exposure through a study tour to other cities with reformed business permitting systems will be relevant, useful and inspiring for the assisted cities. Following the study tour, BPLS workshops were conducted in the six CDI partner cities. This report addresses Task 2.2.2 Streamline business facility construction permitting process, Output 2.2.1.1.3 Workshop/Training/Study Tours on BPLS Streamlining and BPOS Automation.