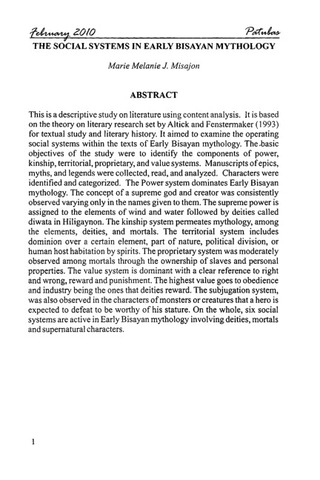 This is a descriptive study on literature using content analysis. It is based on the theory on literary research set by Altick and Fenstermaker (1993) for textual study and literary history. It aimed to examine the operating social systems within the texts of Early Bisayan mythology. The basic objectives of the study were to identify the components of power, kinship, territorial, proprietary, and value systems. Manuscripts of epics, myths, and legends were collected, read, and analyzed. Characters were identified and categorized. The Power system dominates Early Bisayan mythology. The concept of a supreme god and creator was consistently observed varying only in the names given to them. The supreme power is assigned to the elements of wind and water followed by deities called diwata in Hiligaynon. The kinship system permeates mythology, among the elements, deities, and mortals. The territorial system includes dominion over a certain element, part of nature, political division, or human host habitation by spirits. The proprietary system was moderately observed among mortals through the ownership of slaves and personal properties. The value system is dominant with a clear reference to right and wrong, reward and punishment. The highest value goes to obedience and industry being the ones that deities reward. The subjugation system, was also observed in the characters of monsters or creatures that a hero is expected to defeat to be worthy of his stature. On the whole, six social systems are active in Early Bisayan mythology involving deities, mortals and supernatural characters.