Inventory of extant and extinct traditional literature in Western Visayas area I (Iloilo, Antique, and Guimaras) 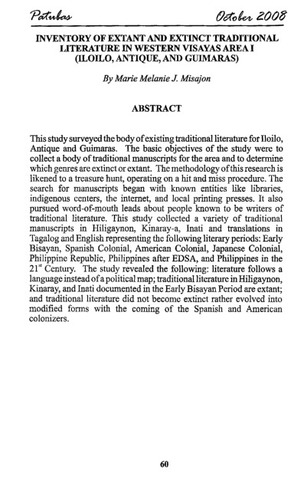 This study surveyed the body of existing traditional literature for Iloilo, Antique and Guimaras. The basic objectives of the study were to collect a body of traditional manuscripts for the area and to determine which genres are extinct or extant. The methodology of this research is likened to a treasure hunt, operating on a hit and miss procedure. The search for manuscripts began with known entities like libraries, indigenous centers, the internet, and local printing presses. It also pursued word-of-mouth leads about people known to be writers of traditional literature. This study collected a variety of traditional manuscripts in Hiligaynon, Kinaray-a, Inati and translations in Tagalog and English representing the following literary periods: Early Bisayan, Spanish Colonial, American Colonial, Japanese Colonial, Philippine Republic, Philippines after EDSA, and Philippines in the 21st Century. The study revealed the following: literature follows a language instead of a political map; traditional literature in Hiligaynon, Kinaray, and Inati documented in the Early Bisayan Period are extant; and traditional literature did not become extinct rather evolved into modified forms with the coming of the Spanish and American colonizers.