Personal and household profile, perceptions and aspirations of the dependent population near the marine protected areas in the Visayas, Philippines 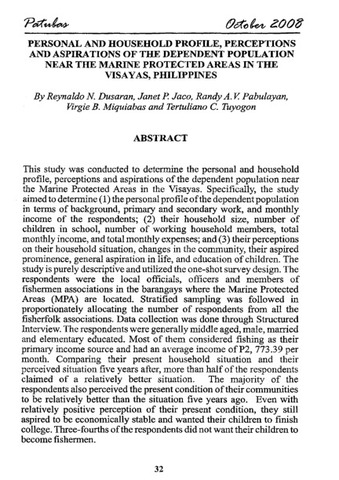 This study was conducted to determine the personal and household profile, perceptions and aspirations of the dependent population near the Marine Protected Areas in the Visayas. Specifically, the study aimed to determine (1) the personal profile of the dependent population in terms of background, primary and secondary work, and monthly income of the respondents; (2) their household size, number of children in school, number of working household members, total monthly income, and total monthly expenses; and (3) their perceptions on their household situation, changes in the community, their aspired prominence, general aspiration in life, and education of children. The study is purely descriptive and utilized the one-shot survey design. The respondents were the local officials, officers and members of fishermen associations in the barangays where the Marine Protected Areas (MPA) are located. Stratified sampling was followed in proportionately allocating the number of respondents from all the fisherfolk associations. Data collection was done through Structured Interview. The respondents were generally middle aged, male, married and elementary educated. Most of them considered fishing as their primary income source and had an average income of P2, 773.39 per month. Comparing their present household situation and their perceived situation five years after, more than half of the respondents claimed of a relatively better situation. The majority of the respondents also perceived the present condition of their communities to be relatively better than the situation five years ago. Even with relatively positive perception of their present condition, they still aspired to be economically stable and wanted their children to finish college. Three-fourths of the respondents did not want their children to become fishermen.