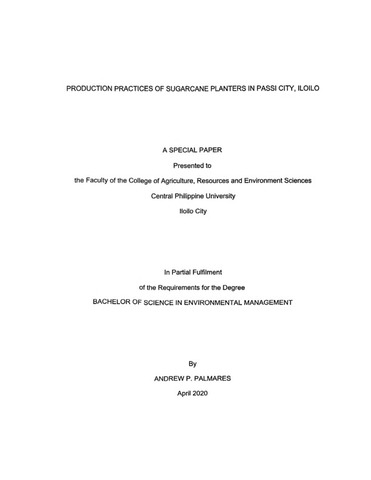 This study was conducted in Passi City in order to determine the farming practices of the sugarcane farmers, the negative effects to the environment, and their problems and recommendations. Data were gathered from 130 farmers respondents using a content validated and pre-tested researcher-made interview schedule. The data gathered were subjected to descriptive analysis. Results of the study revealed that the sugarcane farmers in Passi City were married males on their 50s, Roman Catholics, with college level of education and had business as other source of income. The sugar cane planters owned 5 to 10 ha of land with hilly topography which have been planted with sugarcane for not more than 10 years and producing 60 to 80 tons/ha. Their farming practices included the use tractor for land preparation, use of SPHL 84924 and B150 sugarcane varieties, ratooning up to the third cropping, hilling up twice per cropping, application of herbicides, fertilizers, manual harvesting and burning of plant residues. Application of herbicides, synthetic fertilizers and pesticides are considered by them as having negative effects to the environment such as toxic to the soil, makes the soil acidic with continued use and kills fishes and aquatic organisms. Lack of farm laborers, climate change, and rat infestation were identified as major problems of the sugarcane farmers, of which they recommend the development of farm machines for harvesting, discouraging of burning of plant residues, and development of rat control technology.

Bachelor of Science in Environmental Management