The myths and legends in the island Province of Guimaras 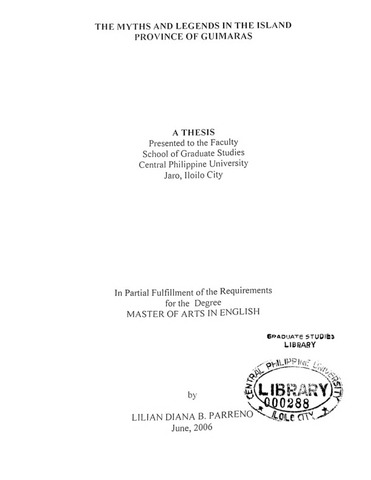 This study focused on the collection and analysis of the different myths and legends in the island province of Guimaras. The study involved qualitative research, with narrative description of data, and narrative description of procedure and logical analysis. In this study, mostly collected materials in the form of documents were analyzed using the qualitative approach. The findings of the study disclosed that almost all the barangays in the whole island province have their own story about their place. There were four (4) mythological legends and ten (10) miscellaneous legend in addition to the bulky name place legends present in the island of Guimaras which totaled to 72. For the setting of the legends the places where the events occurred mentioned the present names of the places. However, there were stories, the place setting of which were not specified. There were no specific dates mentioned as to the time of the occurrence of the events. The dominating motifs may be occurring in pairs such as "good and evil”, “power and strength” and “love and fear”. The characters were not individuals. They were generalized and stereo-typed. They were either "good or bad". As the story progresses, no development of character was evident. The plot varied in terms of length and structural arrangements of events. Some of the legends which pertain to the heroic or laudable deeds of some people were short. Some were statements of the event that occurred. Those, however, with longer narration showed cause-and-effect relation of incidents in the narration. The symbols were the common objects and situations that were related to the daily activities of the characters. Many of the legends of Guimaras island narrated the heroic deeds of some people, stressing lessons one should learn in life. Historical facts may be gleaned from the myths and legends of Guimaras island. Some of the characters were actual persons who had existed and whose heroic deeds and contributions to the place were being honored and valued by the people. Legends and myths of Guimaras island were perceived to be true, describing the daily activities of the people that occur in socio-cultural context. Thus, values were manifested in the different legends that were collected. This study may now be included as a reference material for teachers of Philippine literature, particularly of the schools in the island of Guimaras. The barangays in the different parts of the Guimaras island, may include in their documentation, results of this study as part of their conservation endeavors of the indigenous tradition of their place Intensive collection of oral traditions in the island of Guimaras is also recommended focusing the collection from direct informants, particularly narrated in the dialect of the place. Guimarasnon scholars may also collect and study the island's folktales. The approach employed in this study maybe applied in the collection and study of the Guimaras folktales.