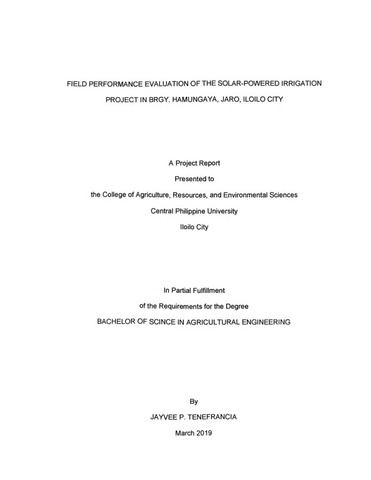 This study was conducted at the present location of the Project in Brgy. Hamungaya, Jaro, Iloilo from May to August 2018 evaluating the actual field performance of the Solar-Powered Irrigation Project The basic components of the Solar-Powered Irrigation Project are: submersible solar pump, solar power modules, control unit or level controller, pipes, mounting structure, steel gates and reservoir. It has the major functions of pumping irrigation water, improving access to water and having no greenhouse gas emissions. This Project was field tested for 5 consecutive days each during the dry and wet seasons giving an actual discharge of 1.634 li/sec and 1.668 li/sec, respectively. The minimum pump efficiency used was 40%. The water horsepower generated for dry and wet seasons were 0.968 Hp and 0.988 Hp, respectively, while the brake horsepower was 2.41 Hp for dry season and 2.46 Hp during the wet season. Results of the performance test of the Solar-Powered Irrigation Project showed that it satisfied the required flow rate of 1.4 li/sec and 0.8 li/sec for the operation of dry and wet seasons, respectively. The 2 Hp rating of the existing pump was less than the brake horsepower computed using minimum pump efficiency which could be increased when certain factors will be applied. Furthermore, the number of solar panels on the design satisfactorily supplied the required power to run the pump efficiently both during the dry and wet seasons.