The management of PNP-Internal Affairs Service in Region 6: An analysis of the process and responsiveness 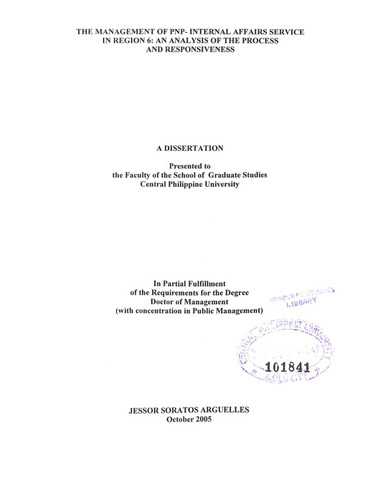 The primary objective of this investigation was to study the management of the Regional Internal Affairs Service in Region 6, focusing on the analysis of its processes and responsiveness. It intended to find the level of responsiveness on cases filed from 2002 to 2003. Specifically, the study attempted to find out the number of cases, types, category of seriousness, profile of policemen involved, personal characteristics of RIAS 6 personnel directly handling cases, the factors that may have facilitated the speedy disposition of cases and the barriers which may have contributed to the delay in case disposition. The research also investigated existing relationships between certain factors or variables. The factors related to the problem, however, may not be viewed as real “causes” of the problem, but factors which are associated with or may contribute to the occurrence of the problem. A document review of state documents such as the Inventory of Cases, Inventory of Cases under Summary Hearing, New Salary Structure, Personal Data Sheet, Pay Slips of respondents and personnel of RIAS 6 were made to answer the specific objectives of the study. A Focus Group Discussion (FGD) was conducted among the investigators and xiv summary hearing officers of RIAS 6 to determine their insights, experiences and opinions about the processes and responsiveness of the IAS. In addition, in-depth interviews were also conducted with selected accused policemen and complainants to obtain their views, opinions and perceptions about the subject. Data were processed and analyzed using simple statistical tools with the aid of the SPSS software. Qualitative data from the FGD and in-depth interviews were transcribed and categorized manually. The findings of the study revealed that in 2002 to 2003, 265 administrative cases filed with IAS 6. These composed 36 types involving 360 PNP members. Of these cases, almost one fourth involved “non-payment of debt”. In terms of seriousness, more than one half of the cases were classified as “grave misconduct.” Most of the accused PNP members belonged to the lower rank Police Officer 1 (PO1) to Police Officer III (PO3). Almost half of them have been in the service for 13-24 years. More than half of them were 31 -45 years old, college graduates and had low income. Almost two-thirds of the cases they were involved in were work-related; Of the 32 RIAS 6 officers and personnel directly handling the cases, almost half had the rank of SPO1 to SPO4; the rest have higher ranks and had served the PNP for 13 to 24 years. More than half of them were college graduates and belonged to middle income bracket. Of the 265 cases filed 133 cases were dropped and closed at pre-charged investigation stage. In 69 cases the accused were found guilty and sanctioned; in 72 cases the accused were exonerated; and in 21 cases, the accused were preventively suspended xiv for not more than 90 days; 4 could not be contacted and were marked Absent Without Official Leave (AWOL) and dropped from rolls. The level of responsiveness measured in terms of the number of days a case was resolved against the prescribed period of 90 days to resolve a case, leaves much to be desired. RIAS 6 was found to be not responsive. Since the average period of case resolution was 272.68 days and only 19.55 percent of the cases were resolved within the prescribed 90-day period. The result of the relational analysis show that the level of responsiveness of IAS 6 in each of the cases filed was independent of the personal characteristics of the respondents, investigators and summary hearing officers. In the resolution of cases there were facilitators which when done appropriately may contribute to the expeditious resolution of the case such as the following: authority to conduct automatic investigation, giving priority to complaints involving domestic problems, the firm belief that IAS was created to uplift the morale, status of the PNP and that it should be an instrument of change. Further, in the conduct of investigation rank is disregarded, the proceedings can be completed if the investigators and the summary hearing officers wanted it to be. On the other hand there were also barriers to responsive case handling as perceived by complainants, police respondents’, investigators and summary hearing officers which one way or another may have contributed to the delays.