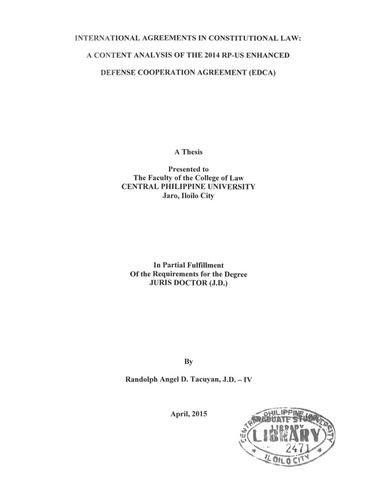 This study was primarily conducted to determine the validity and constitutionality of the 2014 RP-US Enhanced Defense Cooperation Agreement (EDCA) and to assess the possible consequences of EDCA when implemented. Qualitative research methodologies were obtained through data gathering and collation. The presentation of the data gathered was made by correlating the ideas, and ultimately, by creating a synthesis over the said gathered information. The study employed neither survey nor sampling, and no population as well was considered taking into account the non-experimental nature and discursive type of this study. Findings, based on the discussion presented, showed that the 2014 RP-US Enhanced Defense Cooperation Agreement (EDCA) is, indeed, a treaty. Most provisions of EDCA run afoul the provisions of the highest law of the land, the 1987 Constitution. It also revealed that the defense of the administration that EDCA is an executive agreement was only a strategy in order to circumvent the Constitution. Findings of the study likewise showed that the Mutual Defense Treaty and the Visiting Forces Agreement of the US and the Philippines before were independent from EDCA, the latter not being a mere implementing rules and supplement to the former military agreements. On the other hand, the study revealed that there was a significant similarity between EDCA and the defense agreements of Romania and Bulgaria. It was also perceived that if the executive will continue to implement EDCA sans the 2/3 concurrence of all the members of the Senate, a constitutional crisis will more likely to happen. In the final analysis, it is found that executive agreements are often used in order to bypass the requirements of national constitutions for ratification of treaties. However, the Senate cannot compel the executive to submit the same for concurrence. Therefore, it is now with the Court to exercise its power of judicial review to settle the controversy.