From multilateralism to ethics: The transformation of a practice 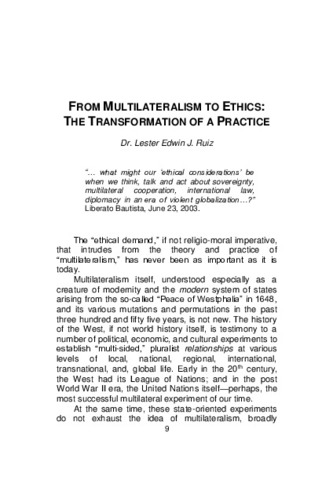 The “ethical demand,” if not religio-moral imperative, that intrudes from the theory and practice of “multilateralism,” has never been as important as it is today. Multilateralism itself, understood especially as a creature of modernity and the modern system of states arising from the so-called “Peace of Westphalia” in 1648, and its various mutations and permutations in the past three hundred and fifty-five years, is not new. The history of the West, if not world history itself, is testimony to a number of political, economic, and cultural experiments to establish “multi-sided,” pluralist relationships at various levels of local, national, regional, international, transnational, and, global life. Early in the 20th century, the West had its League of Nations; and in the post-World War II era, the United Nations itself—perhaps, the most successful multilateral experiment of our time.