Design of a 20-kilowatt micro-hydro power system for the electrification of Barangays Rosal and Rivera in Libacao, Aklan 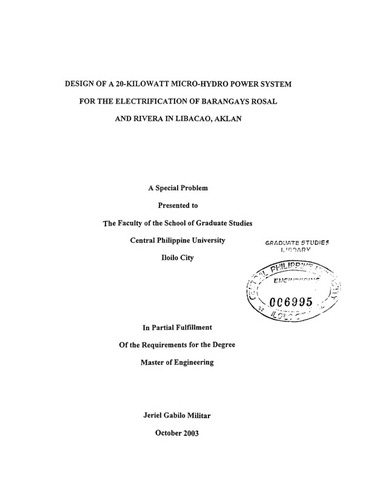 Electrification is vital to the government’s rural development program. However, electrification of remote and isolated barangays via grid extension is currently rendered almost impossible by economic and technical barriers. The alternative to extending the grid to these barangays, as determined by the Department of Energy, is the putting up of a stand-alone community-based power plant. But considering the low income level and the lack of technical know-how of the people in most of these communities, such a plant should be simple enough that it can be operated and maintained by the local people, and should have low operation and maintenance cost such that it can be sustained by the community. This study looked into the feasibility of putting up a micro-hydro power system as an alternative to extending the grid to energize Barangays Rosal and Rivera in Libacao, Aklan, two very remote unenergized barangays which are adjacent to a common waterfall. It was found that installation of a 20-kW micro-hydro power system using locally fabricated turbine, penstock and load controller to serve both barangays was technically feasible; that although the initial installation cost was beyond the paying capacity of the beneficiaries in the two barangays, the project could qualify for a funding from the Department of Energy under the “O Ilaw” Program.