The female streetwalker prostitutes of Iloilo City: Their reasons for engaging in prostitution and their present economic, health, and sociopsychological conditions 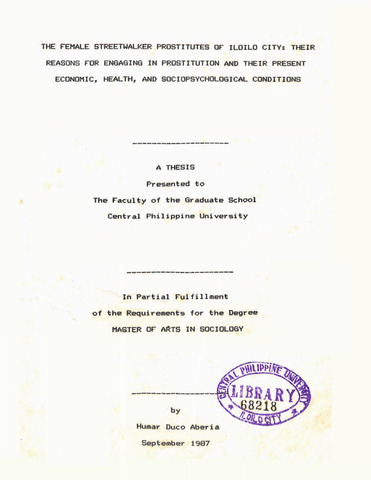 The Study aimed to find out the reasons why some women became prostitutes; determine the demographic, educational, and educational characteristics of the prostitute's own or their parents family; and find out the present economic, health, and sociopsychological conditions of the prostitutes. Using a descriptive research design, quantitative and qualitative data were gathered from the streetwalker prostitutes of Iloilo City with the help of two hired interviewers and by the researcher. The first two respondents were identified with the help of informants, the succeeding respondents were located with the use of snowballing technique until a quota of 30 samples was reached. Results reveal that most prostitutes included in the study were in their early twenties, single, high school educated, and in-migrants from other places in the Visayas and Mindanao. Most prostitutes families were poor, with the average size slightly smaller than the regional and national averages, have completed one year of high school education, with one working member supporting less than one respondent. Most families depended on their heads while some depended on the prostitutes for their daily maintenance. Women who became prostitutes due to poverty did voluntarily while some were recruited illegally. Keen competition among the numerous prostitutes in the city motivated them to employ different techniques, with some working with pimps to hook customers. Prostitutes selected customers primarily on the basis of their ability to pay using hotels as their favorite places for exchanging sexual favors. The nightly income of a prostitute which was higher than that of a public elementary and high school teacher, depended upon her looks, number of customers served, and her asking price. Many prostitutes were victims of sexual exploitation of some men including policemen and Philippine Constabulary troopers. There was an alarming incidence of sexually-transmitted diseases among the prostitutes included in the study, the most common being gonorrhea. Most prostitutes submitted themselves for medical check-up while there were those who did not, for fear of being arrested once known. Some prostitutes continued practicing the trade in spite of their being infected by sexually transmitted diseases. Most parents knew that their daughters were prostitutes yet, in spite of their initial disapproval, they later on consented by allowing their daughters to support the education of their brothers and sisters. Most prostitutes were unhappy and dissatisfied with their trade and expressed their willingness to get out if decent and better-paying Jobs are made available to them. Like many human being, prostitutes have wishes for themselves and their families.