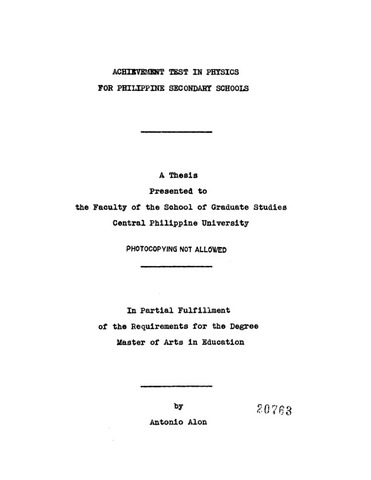 The happenings in the last half of the twentieth century have led people to the realization that science is one of the dominant forces of the time. As a science, physics plays an important and dynamic role in the development of the "scientific age." The marvelous scientific achievements that arouse the admiration of the people are based mostly upon the principles and laws of physics. The atom bombs, rocket ships, radars, televisions, jet planes and computing machines are but a few examples of the thousand and one inventions made possible by the application of the principles and laws of physics. Man's ways of living, his manner of thinking and his idea of what constitutes success and happiness are being changed by physics. Physics takes a leading part in molding the character of the advancing civilization. In a recent issue of an American magazine a forecast was made that in the next twenty five years our life would be affected by the "massive transformation of the elements"1 which would cause changes in our industrial, social and political life. Statement of the problem In view of the amazing progress made by science affecting almost every part of our life, physics might be expected to be popular as a subject among the high school students. Instead, physics has declined in popularity because of its being considered a difficult subject. The number of fourth year high school students taking physics has decreased since it was made an optional subject in the Philippine public high schools in 1945, and in the private high schools in 1951. The assertion that physios is difficult is based upon the fact that of all the subjects in the fourth year high school, this one has the greatest number of failures every year. Taking into account the fact that many of the teacher made measures are not scientifically prepared, it might be concluded that many of the failures are due to a great extent, to the defects in the measures themselves. The problem that this study attempted to solve was to prepare a test that would be valid and reliable for determining the achievement of Filipino high sohool students in elementary physics. This study was concerned only with the preparation of a test that would be the basis for a standardized achievement test in physics in the future. In addition to the use of statistical analysis in validating the test as a whole and the individual test item, this study attempted to answer the following questions in order to give the test curricular validity: 1. In the development of the test, have adequate provisions been made for the participation of several physics teachers and other authorities by securing their opinions with regard to the field and content and to the form and technical merit of each test item? 2. Since the fundamental objectives of education are ultimately concerned with the modification of human behavior, has analysis of the objectives of physics instruction in the Philippines been made to determine what activities and skills are to be appraised in this test? 3. Have the objectives of physics and good teaching practice been paralleled in this test? 4. Does the test reveal the adequacy of sampling and the approximate proportion of emphasis in the course? 5. Do the individual test items possess the characteristics of a satisfactory test item? a. Does the test avoid the use of questions or problems that could be answered from intelligence alone? b. Does each item call for an answer sufficiently objective? c. Is each item so phrased that irrelevant or superficial clauses and ambiguities are avoided?