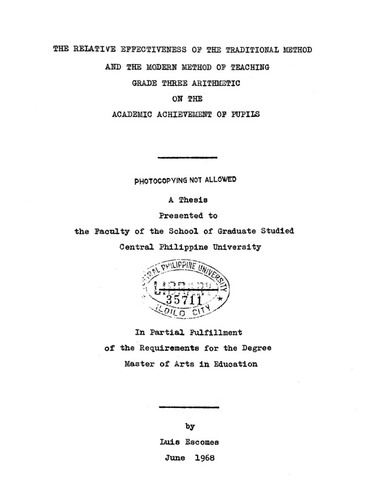 This experiment sought to answer this question: Which of the two methods, the modern method (method 1), or the traditional method (method 2), is more effective in teaching grade three arithmetic? The null hypothesis adopted was: Method 1 is as effective as method 2 in teaching grade three arithmetic as far as academic achievement is concerned. The F-test and the t-test at the .05 level of significance were used to test the null hypothesis. If the difference in the means of the two methods were significant at the .05 level, the null hypothesis would he rejected and the method having the higher mean would he considered the better method. The study was conducted in Dalapitan Elementary School, Matalam District, Cotabato Second Division. The subjects involved were grade three pupils composed of 30 girls and 32 boys, divided into two parallel groups, the person-to-person matching based on the following criteria: age, sex, and standard scores in the initial test, average in grade two, and socio-economic status. Those with almost the same or the same points in the initial test, average in grade two, and socio-economic status, and with almost the same or the same age were paired. Initial test and average were each given a weight of two and socio-economic status was given a weight of one. No intelligence test was given because there were no facilities for this. To take care of imperfections in the grouping, the statistical measure used was the analysis of covariance. After the two classes were organized, the mean and the standard deviation of each class in the initial test, average in grade two, and socio-economic status were computed. The two groups were then presumed parallel as far as initial test, average in grade two, and socio-economic status of pupils were concerned. Method 1 was introduced in Group A and method 2 was used in Group B. The traditional method consists of teaching arithmetic by following fixed definite steps while the modem method consists of giving pupils the freedom to discover solutions to arithmetic problems through the guidance of the teacher. Since the experiments covered three grading periods, three periodical tests were given. The tests did not show any conclusive proofs that either group was better than the other since the differences in the means for each grading period were not significant at the .05 level. The only fact the tests showed was that Group B was consistently getting a higher mean than Group A. A final achievement test was given in the early part of December. The mean obtained by Group A was 28.84 while that of Group B was 35.48. After the analysis of variance of X (initial teat) and Y (final test) scores taken separately, the obtained F on X was .06; for Y it was 2.67. (With df = 1/60 at .05 level, P = 4.00). The F of .06 and 2.67 are not significant at .05 level. This was another proof that Groups A and B were parallel at the start of the experiment. Further computation was made and the analysis of covariance was done. The obtained Fy.x was 5.39. With df = 1/59, at .05 level, F = 4.00. The difference in the means was significant at .05 level. A further computation was made to calculate the adjusted Y means. The adjusted Y mean of Group A was 28.52 while that of Group B was 35.80. There was a difference of 7.28. For df = 59, t at .05 level = 3.09 x 2 (3.09 is the SED, between the two adjusted means), or 6.18. The difference between the adjusted Y means which is 7.28, is significant at the .05 level. The result of the experiment showed that the difference in the means between Groups A and B was significant at the .05 level and so the null hypothesis was rejected. The modern method was considered a more effective method than the traditional method in teaching grade three arithmetic as far as academic achievement was concerned. Since the modem method is a better method in teaching grade three arithmetic, it is recommended that: a. The modern approach should be the method used in teaching arithmetic throughout the elementary grades; b. Teachers in the field should be trained in the modem mathematics approach; c. Teaching materials, textbooks, workbooks in modern mathematics should be made available in the hands of the teachers in the field; d. Teacher-training institutions should include modern mathematics as one of the required courses in their education curriculum. It would be useful to education if research can be done on the following: a. An experiment of similar nature to this experiment, in other grades in the elementary school b. A longitudinal study of the effectiveness of either the modern or the traditional method throughout the elementary grades (Pupils will be followed and taught by the same teacher throughout the elementary grades using either method and comparing results.) c. An investigation of the attitude of pupils towards modem mathematics and traditional arithmetic (This could be possible in big elementary schools where pupils can be given the option of attending either the modem mathematics class or the traditional arithmetic class.) d. An investigation of the attitude of classroom teachers towards modem mathematics and the traditional method of teaching arithmetic.