Repayment status of micro, small and medium enterprises’ (MSMEs) clients in the Province of Negros Occidental under the DTI’s selected financing programs 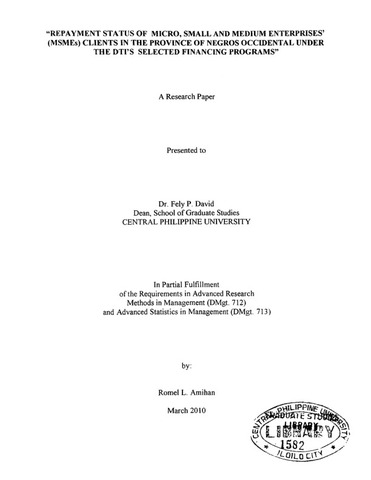 The study on the Repayment Status of Micro, Small and Medium Enterprises’ (MSMEs) Clients in the Province of Negros Occidental under the DTI’s Selected Financing Program, generally aims to determine factors that influenced the repayment status of DTI-assisted MSMEs in the said Province. Specifically, this research hopes to describe the relationships among variables such as: borrowers’ characteristics, business characteristics, loan characteristics, the variation of technical assistance, and the borrowers’ attitudes toward government loan program vis-a-vis the repayment status. As a backgrounder to the study, a review on MSMEs’ roles and importance to development was detailed. Since this endeavor has been focusing on micro-financing program, the latter’s literature was likewise undertaken. Although, the study has its scoped in Negros Occidental only, nonetheless, microfinance in the Philippines was evaluated. The literature serves a very important document because the contributions of micro lending to various beneficiaries were identified, the evolution of micro­ financing, key findings on the lending and borrowing patterns to/from MSMEs/GFIs and/or non-financing institutions are also discussed. Going towards government interventions on SME development, an SME Development Agenda were included in the review. It was found out that there are several government instrumentalities that are grossly involved in MSMEs’ advancement. In fact, every incumbent administration has had there own share for the growth of the sector. For instance, in compliance with President Arroyo’s directive, the DTI convened all the key players in MSME development, including the pertinent government departments and agencies, and formulated the National SME Development Agenda. The plans would lay down programs for SME development. Policies were also crafted to addressing pertinent issues that confront the sector. As the former BSP Governor Buenaventura once said in one of his interviews... he gladly responded that the sector has made significant progress. He added that through the National Strategy for Microfinance, a policy framework was created and several laws and issuances were passed to ascertain that the private sector will have a greater role in the provision of financial services and that the government will focus on the creation of an enabling policy environment. In understanding thoroughly the MSMEs and the Philippine Financial System, the former was elaborated in terms of the MSMEs’ structural features, and development issues in MSME sectors (with key issues and challenges). On the other hand, the Philippine financial system’s discussions are focused on the classification of formal and non-formal banking sector, non-banking institutions, their geographic concentrations, formal sources of credit for MSMEs and the trends in the financial sector. Knowing that MSMEs are potent players in fueling the economy thru the provision of employment, related important issue on poverty was included. A discussion on poverty incidence, poverty alleviation and strategy to fight poverty were likewise highlighted. On the assessment of the past micro-lending programs (SULONG, TST-SELA, etc.) to MSMEs assisted by DTI in the province of Negros Occidental, again, the author is investigating on the direct/indirect links o f the pre-identified variables to the status of repayment. In the study, hypotheses were tested, such that; the hunches on the claims were concretized and validated. Thus, in the framework (conceptual/theoretical), it was tested that borrowers’ characteristics have no significant relationship with the loan characteristics and to the variation o f technical assistance, no significant relationship between borrowers’ business characteristics and the borrowers’ attitude towards government loans, and the like. However, there is leveraging relationship between the variation of technical assistance and the attitude towards government loans, significant relationship between the technical assistance availed and the loan repayment status, and the like. (Please see Findings for complete discussion). The assessment of hypotheses was done using Pearson Chi-square test of significance to 30 samples. Their responses were solicited using the guided questionnaires that were tested and re-tested for validity. The processing of collected data was made using the Statistical Packages for Social Sciences (SPSS). With the aid of other literature dug out from this research, and comparing the results to this endeavor, there are other relevant recommendations that are still apt even up to the present time. However, there are recommendations that purely peculiar to this study. Recommendations to hasten the consolidation and rationalization of Directed Credit Program (DCPs) for MSMEs, consolidate and rationalize government's MSME credit guarantee schemes, rationalize and improve the provision of non-financial support services to enhance the competitiveness and bankability of MSMEs, and continuous education of the beneficiaries and project implementers through seminars and trainings, conferences and conventions are just some to mention.