Perceived dishonest acts in local government units: Awareness, attitudes and practices of employees in the provincial government of Negros Occidental 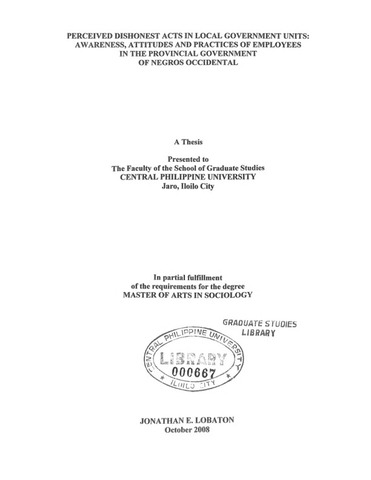 While popular opinion says that there is prevalence of corruption in government offices in the Philippines, it lacks evidence that would truly support such claim. The fact remains that only a few government employees had been suspended or penalized because of corrupt practices while branding of government as corrupt had been blown out of proportion. Hence, this study concretized the claim of corruption by knowing the extent of awareness, attitudes and practice of dishonest acts of local government employees in the Provincial Government of Negros Occidental. This study covered the employees of the different offices under the Provincial Government for the year 2006 to 2007. The descriptive research is employed in this study and used a survey instrument to draw data from the respondents. The respondents of 320 were taken from the total population of 1,600 permanent employees of the Provincial Government and were stratified according to office. The respondents were proportionately allocated among the 28 strata. Of the 320 respondents, 41.30 percent are male while the female is 58.80 percent. There are more female respondents in this study than the male respondents. There are more respondents who are 45 years and younger (57.81) than 46 years old and above, which is nearly half at 42.19 percent. In terms of education, 91.9 percent were college educated while only 8.10 percent were high school educated. Eight in ten (80 percent) has rank and file positions, while 20 percent were office heads or supervisors. On the length of service, 51.56 percent of the respondents had served within ten years time, while 48.44 percent had served for 11 years and above. This study showed high extent of awareness of dishonest acts committed in the workplace. All of the respondents signify awareness of dishonest acts performed by majority of the employees in their offices and on a number of times. This is despite the fact that majority also possess positive attitude or attitude that signifies disagreement with the commission of dishonest acts. The employees affirmed the boundaries set forth by the code of conduct and ethical standards for public officials and employees (Republic Act 6713) but still they commit those acts. Majority of them admitted commission of the acts that mostly involve the use of government properties like vehicles, resources, supplies and facilities to meet personal needs. In the light of a common belief that corruption exist in government, this study narrow down its discussion on the simple acts that are violative of the Republic Act 6713. And this confirms the existence of corruption in a local government based on the behavior displayed by employees in their workplace. It is perceived as the widespread dishonesty among government employees regardless of age, sex, educational attainment, office position and length of service. Thus, it poses a serious challenge to the officials of the Provincial Government to impose corrective measures to restore efficiency among offices and commitment to serve on the part of the civil servants.