On ancient myths, religion and modernity with focus on the Filipino 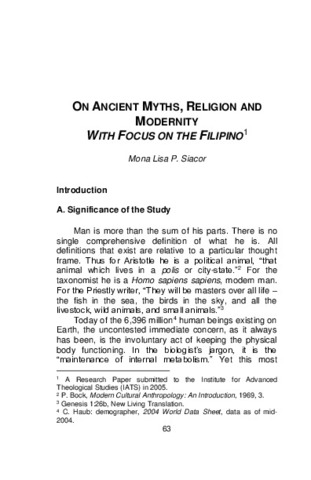 Ancient myths, religion and modernity spoken within the context of sociology and anthropology will primarily disable the inclusion of the Christian tenets within the preliminary discussions. This inclusion will be done on the Reflection part at the end, as I feel appropriate. This paper will prominently feature the Filipino. He lives in the twenty-first century of the Common Era and has undergone about four hundred years of relatively abrupt cultural movements. No better justification can be given in choosing this special point of focus other than as one of them. This should help in the understanding of my society better, be a small contribution to my countrymen’s concerted efforts at trying to understand our non-monotonous national psyche, and from thus be active participants in the taking care of humanity and of the world. God has appointed us as stewards of His creation. The Filipino makes a fascinating subject in that he is a manifestation of the meeting of the so-called East and West, and of the so-called primitive and modern. This paper will try to present characteristics of the Filipino that qualify him as mentioned. In so doing, his belief system will be looked at, hence, the focus will be made on his religion and mythology. Thus, in attempting to describe modern man, especially the modern Filipino, from a particular perspective, it is hoped here that a picture will be presented on where he gets his beliefs from and the strength of the influence these beliefs have on him as he moves on toward the future. In presenting the Filipino in this light, attention will be drawn on the fact that there is no reason at all to consider his heritage inferior to any other people, whether from the anthropological sense or from Christianity’s perception.