Paul’s leadership style: A model for the 21st century Christians 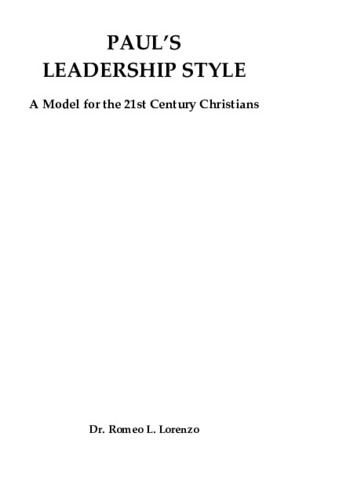 “You may wonder why of all the topics under the sun I have chosen to write about Paul’s leadership style as a model for the 21st century Christian leaders. Let me share with you the reasons. First, as I read the New Testament, I was overwhelmingly blessed by the life and works of the apostle Paul especially by his establishment of the Christian churches in the Mediterranean world including that in Corinth. It had been difficult and painstaking for he was persecuted, beaten, jailed, and eventually executed. In spite of these painful experiences, his faith did not waver, his commitment did not falter, and his love and devotion to his Master and Savior Jesus Christ remained. His burning desire to preach the good news of salvation by grace through faith to the Greeks and Gentiles had never been shaken for he said: “Woe to me if I don’t preach the gospel.” Had it not been for the apostle’s missionary zeal many would still have been under the curse of the law or under the tormenting power of the Devil. I thank God for this man who laid down his life for the sake of the gospel. Second, I was extremely impressed by his unique style of leadership in the Corinthian church. It was the largest and the most gifted church he founded but underlying the huge attendance, variety of gifts, and impressive building or physical structure were serious problems that torn the congregations apart. These problems included division among preachers, immorality, misuse and abuse of spiritual gifts, administrative problems, and the like. Physically, this church seemed healthy but very sick spiritually, a perfect picture of many Christian churches today. Paul’s management and leadership styles to me are worth studying especially because many of our churches in this millennium are in the same situation. The power of the Apostle Paul’s leadership in the Corinthian church is beneficial or useful not only to churches but to other Christian institutions as well (e.g. learning or academic institutions, hospitals), and also to secular establishments that seek to introduce an effective and time-tested approach in leadership. Third, the Apostle Paul’s personality is worth emulating. He was flexible but firm in his theology, fatherly but strict disciplinarian, intellectually and spiritually excellent but very humble because Christ mattered most than anything or anyone else. His character is worth emulating by pastors and Christian leaders in order to be successful in the ministry. Lastly, I hope and pray that this simple book can be used as a guide for the 21st century Christian churches and leaders and at the same time inspire many to remain steadfast and immovable in the Lord, especially in this end time, knowing that our labor in the Lord is not in vain.” From the Preface