The significance of the Elterngebot: A biblical, historical, and systematic investigation 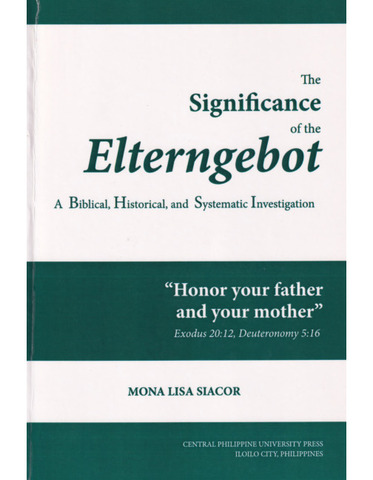 This book looks into how the Decalogue's injunction to honor parents was treated or applied throughout the history of the direct recipients of the Judeo-Christian teachings. This means treating biblical Israel first as the roots, next the Greco-Roman context that contains the New Testament and other contemporaneous literature, then western Europe and through it to wherever western European influence can largely be seen today. With such an extremely wide scope, and while trying to situate the relevance of honoring parents throughout this course of history, backgrounds that deal with the general situation and then of the family are given priority. At best it is an attempt to get a broad sketch of how the Decalogue commandment to honor parents had fared ever since Christianity took off from Palestine. There is no assumption, however, that any generation's treatment of parents and the elderly is a direct effect of how the commandment to honor parents is being taught at that historical point. That is, taking care of one's elderly parents is considered as part of the natural law, and so universal, regardless of the historical perspective. What this work has tried to do is to trace what has happened to the commandment to honor parents, so to speak, in order to gain insights of its relevance to our present context. —from the book

This work was accepted as a dissertation (under the Institut fur Evangelische Theologie) by the Fakultatfur Philosophie, Kunst-, Geschichts- und Gesellschaftswissenschaften [Faculty of Philosophy, Art-, History- and Social Sciences] of the University of Regensburg, Bavaria, Germany in 2017