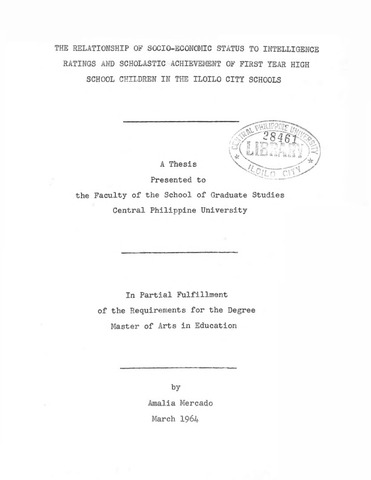 To a great extent, socio-economic status determines one’s educational opportunity. Participation in extracurricular activities, as well as popularity and leadership in school is associated with one’s socio-economic status. The extent and kind of education one can acquire depend on his ability to pay. In the Philippines where social stratification is rather pronounced, socio-economic status determines the curriculum a student pursues, especially on the secondary and college levels. Children from the higher socio-economic level seldom go to secondary schools receiving children from the lower classes; those from the lower socio-economic level content themselves with whatever school can admit them for what little amount they can pay. Sometimes they leave school when severe financial handicaps beset them. That education in the Philippines is influenced by social class is obvious; nevertheless, the effect of socioeconomic status on the intelligence and school achievement of Filipino children has not yet been established. Free education in the Philippines terminates with the fourth grade; the education of children becomes the financial concern of the family starting with the fifth year of elementary education. However, as a result of the free elementary education in the Division of Iloilo City Schools these past three years, more and more children in the division have enjoyed the opportunity to finish the elementary grades. This form of free education includes free textbooks and school supplies as well as exemption from fees. Undeniably, such an educational privilege has greatly increased the retaining power of the school. The further offer of a tuition-free high school education in the same school division has increased opportunities for secondary education. Families that ordinarily cannot afford to educate their children beyond the elementary level have taken this opportunity to send their children to high school. Low status children comprise the bulk of the student body of the two free public secondary schools in Iloilo City. These children come from families that can hardly afford a tuition-free high school, much less provide their children the necessary materials for study. Statement of the problem. Under the circumstances described above, the conscientious learners in the lower socioeconomic group may be partly handicapped by the lack of study facilities. To the less diligent students, the lack of textbooks proves a good excuse for not studying. How much, then, do these children achieve? Do their counterparts in the lower socio-economic status accomplish more than they do? Does socio-economic status affect their academic achievement? On the other hand, there is that other group of children who are capable of meeting the expenses that an education entails. How do they compare with their counterparts in the opposite stratum of society, in intellectual capacities and school achievement? Indubitably, the children from the opposite socio-economic levels differ considerably in experiences, in the extent to which their material needs are met, and in the recreational activities, as well. It is the purpose of this study to determine the relationship of socio-economic status to intelligence ratings and to academic achievement.