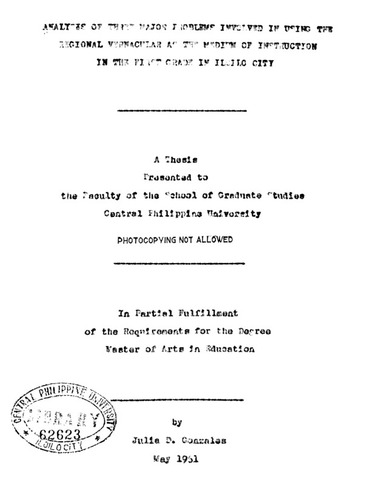 The teaching in the local vernacular in the first two grades of the present school system has gained rather rapid momentum in this country. It has given substance to primary education and has helped to cement the relations between the school end community. With the introduction of the vernacular as the medium of instruction some problems of the community are being solved. Illiteracy, the growing "cancer" of the out-of-school youths and adults, is now being treated through vernacular instruction in the lower primary grades. This interest in the use of the local dialect in teaching is a tacit recognition of the value of the vernacular in enhancing ths effectiveness of education for the child. It has always been maintained that the cost effective of instruction is the language that the child knows. Considering the brief stay of children in school and the large percentage of elimination from grade to grade, the use of the vernacular is the cost effective way to train for intelligent citizenship. The "little Teachers" in Cagayan, Bulacan, and Iloilo have become part of the progressive proram through the use of the vernaculars. The pioneering spirit of Dr. Jose V. Aguilar, the former Division Superintendent of schools of Iloilo, the chief proponent of the vernacular movement has now answered this question: "That language should be used as a medium of instruction in the early primary grades?" When Dr. Aguilar conducted his study and experiment in the use of the vernacular, the result was very gratifying and encouraging. There appeared to be more rapid learning of English through the basic foundation of knowledge of the vernacular In the first two grades. However, with the introduction of the native language as the medium of instruction in accordance with the provision of Article II Section 10 of the Revised Educational Program promulgated by the National Board of Education, has come much confusion to the teachers in the first two grades. This present study was an attempt to define of the problems which caused this confusion. Statement of the problem The widespread implementation of the use of the vernacular as the medium of instruction in the first two grades in both public and private schools has brought about several problems. Some of these problems were cited during a concference held on June 26, 1957, at Colegio del Sagrado Corazon de Jesus in Iloilo City, under Dr. Nemesio Agunod of the Bureau of Private Schools. This meeting was composed of heads of the local colleges of education, B.S.E.Ed. instructors, principals, and critic teachers of the elementary training department of the different private colleges and universities of Iloilo City. This meeting brought the investigator a realization of the pressing need for undertaking this study. However, because the needs appeared to be too many for one study, she limited herself to the analysis of three of the major problems involved in using the regional vernacular as the medium of instruction in the first grade in Iloilo City, namely: 1. The problem of materials for instruction for both pupils and teachers. 2. The problem of agreement as to the accepted form of the vernacular to be used in the classroom. 3. The problem of teacher-training.