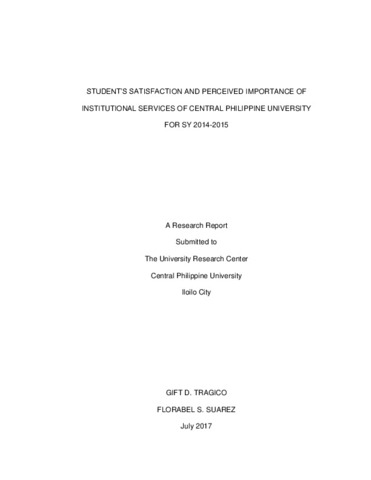 This study sought to determine the level of students’ satisfaction and perceived degree of importance of institutional services of Central Philippine University for the school year 2014-2015. The Student Satisfaction and Perceived Degree of Importance Inventory, a researcher-made questionnaire, composed of 92 items and divided into twelve services was administered to 386 students enrolled during the second semester of SY 2014-2015, chosen using accidental sampling. Descriptive statistics such as frequency, percentage, rank, and means was employed and test of difference such as t-test for independent samples and One- way Analysis of Variance set at .05 alpha level were utilized. Overall results revealed that students were “satisfied” with student spiritual life, campus climate, academic services, student centeredness, responsiveness to diverse populations, academic support services, and service excellence. While “slightly satisfied” with campus safety and security, admission and registration, scholarships/ grants-in-aid, and campus support services. They perceived all University’s services as “Important”. Female; respondents who graduated from public-rural high schools; residing in the provinces of Iloilo and Capiz; second year college; from the colleges of Arts and Sciences, Education, Law, School of Graduate Studies, High School; regular students, scholars, or working students; Baptists; and have stayed in the University for 1 year or less were “satisfied” with the services, while the others were “slightly satisfied”. Significant differences in the students’ level of satisfaction with various service areas of the University were found when they were classified according to sex, college/department, year level, residence, religion, type of high school graduated, type of student, and number of years stayed in CPU. Students ranked student spiritual life as the most satisfying service but academic services came out as the most important one. Finally, results are consistent with the previous findings of the same study conducted in school year 2012 – 2013. Students were undecided with the University’s fees and billing practices as it was rated “neutral”. The overall mean results (5.25 or “slightly satisfied”) decreased by one level when compared to the three previous surveys, (5.31 or “satisfied” in 2005-2006, 5.37 or “satisfied” in 2009-2010, and 5.48 or “satisfied” in 2012 - 2013).