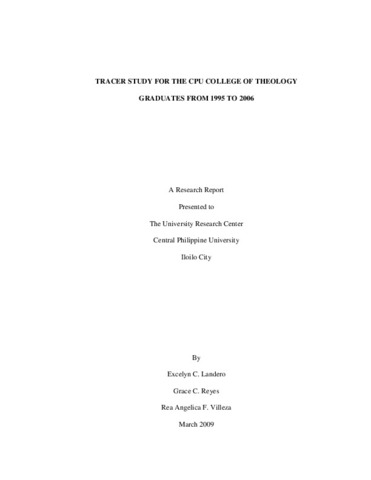 This tracer survey was conducted in compliance with the Commission on Higher Education’s requirement for Quality Assurance, Monitoring, and Evaluation of Higher Education Institutions. It aimed to gather necessary information as to the employment of the CPU College of Theology graduates from year 1995 to 2006. Sixty out of 90 graduates constituted the respondents. This is a descriptive study that used the one-shot survey design. The instrument used was based on the CHED graduate tracer survey. Result of the study showed that majority of the respondents were married, female, with ages between 31-35 years old, and lived in Region VI. Most respondents finished Bachelor of Theology and were employed as full time pastor in Baptist or Evangelical churches under the Convention of Philippine Baptist Churches (CPBC), or were connected with CPBC – related institutions. Most of the respondents who opted to change jobs identified career challenge as the reason.