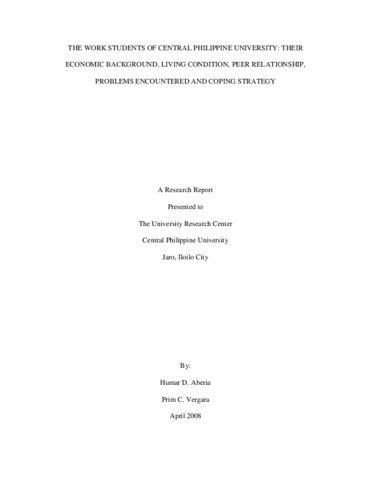 This descriptive study attempted to determine the economic background, living condition, peer relationship, problems encountered, coping strategies, and level of satisfaction of the work students of Central Philippine University. Data for this investigation were gathered from 502 work students assigned to four work areas from September 5 to October 17, 2007 using a researcher-made data gathering instrument divided into seven sections. The instrument was face and content validated. Data gathered were analyzed using means and percentages and presented in frequency distribution tables. Result of the investigation showed that the respondents are 19.12 years old on the average, enrolled in more than 26 courses in the University, most come from the province of Iloilo, and are mostly first and second year college students. Most of them are from rural areas with an average of 6.56 members per family. Most of their family members are student, their father are mostly farmers or laborers, and their mothers are predominantly housekeepers. The family’s total monthly income averaged Php. 4,082.09. Most respondents live in their own house which is reportedly small, with leaking roof and constructed in their own lot. Those who reported problem on housing indicated that their house is under threat of demolition. Most obtained piped-in drinking and about half of them claimed to have flush toilets. While studying at CPU, most respondents rent a bed-space, for an average of Php. 811.05 per month, cook their food, use charcoal as fuel for cooking, and drink bottled water. Many boarding houses do not have separate toilet and bathroom for male and female boarders, have small bedrooms, for four persons and a space of 25.58 square feet per person. Most respondents wash their own clothes and iron them using charcoal and electricity. More respondents were found to be more friendly with their board-mates, than with their fellow work students and supervisor. The respondents employed various coping strategies to solve the problems they encountered while working and studying at Central Philippine University. The respondents are undecided on whether they are satisfied with their hourly rate or not. They are however satisfied with the work facilities, relationship with supervisor, work schedule, work load, study load, and area of assignment.